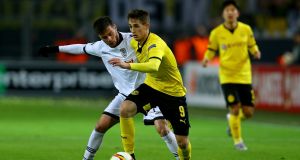 Adnan Januzaj is to return to Manchester United early from his season-long loan at Borussia Dortmund because of a lack of games, the unsuccessful spell meaning the 20-year-old rejoins Louis Van Gaal’s squad with his career at a crossroads.

While the attacking midfielder is expected back this week he is unlikely to be available for Saturday’s visit of Sheffield United to Old Trafford in the FA Cup third round as he will not be match fit because of the Bundesliga’s winter break.

Van Gaal had hoped the Belgian would gain valuable experience by playing regularly for Dortmund but he was never deemed good enough by Thomas Tuchel to start in the German elite division. Januzaj was selected only for Europa League games.

During David Moyes’s tenure two seasons ago Janzuaj was one of the few successes, breaking into the side with some impressive, match-winning displays. Yet following Moyes’s sacking in April 2014 Januzaj gradually slipped from the first-team reckoning.

Januzaj’s lack of success at Dortmund will be a particular disappointment. When on holiday in Dubai last summer he - along with Luke Shaw - took a personal trainer to try to attain optimum sharpness before the new season.

There is no plan to recall James Wilson from Brighton & Hove Albion despite Van Gaal’s lack of striking options.

Meanwhile Liverpool are to recall Sheyi Ojo from his loan spell at Wolves in response to their extensive injury list and hope to include the winger in Friday’s FA Cup tie at Exeter City.

Ojo is one of 17 Liverpool players out on loan, scoring three goals in 19 appearances for Kenny Jackett’s team. Jurgen Klopp desperately needs reinforcements with 11 first-team players sidelined by injury. The 18-year-old will feature in the third round tie at Exeter providing his registration is approved by the FA by noon on Friday.