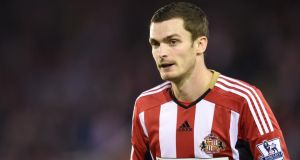 Sunderland’s Adam Johnson has been released on bail after allegations were made he slept with a 15-year-old. Photograph: PA Wire

England footballer Adam Johnson has been bailed until the middle of the month after police arrested him on suspicion of sexual activity with a girl under 16.

The Sunderland player was questioned by police yesterday following the allegation involving a girl who is believed to be 15 years old.

He has been suspended by the club, pending the outcome of the police investigation.

Durham Constabulary said last night that a 27-year-old man arrested on suspicion of sexual activity with a girl under 16 years had been released on bail “pending ongoing investigations”.

The force has since said he will answer bail on March 18.

There was no answer at his gated modern mansion which is screened by trees in the pleasant County Durham village of Castle Eden.

Johnson, who was questioned at Peterlee police station in County Durham, had been due to travel with the Sunderland squad to Humberside yesterday ahead of tonight’s Barclays Premier League fixture at Hull.

The winger, born in Sunderland, has represented his country 12 times and also played for Middlesbrough and Manchester City.

He cost the Wearside club #10 million when they purchased him in 2012 and he has gone on to score 17 goals for them.

Meanwhile, Durham Police have reminded the public that identifying someone who may or may not be a victim of a sexual offence is against the law.

A spokesman said: “Victims of sexual assault are guaranteed the legal right to lifetime anonymity and publishing any details, including on social media, which may lead to their identification, is contrary to the Sexual Offences (Amendment) Act 1992.

“Durham Constabulary wishes to remind social media users, and anyone else, who breaks the law that they will be dealt with robustly.”