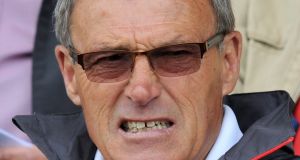 Crewe director of football Dario Gradi has released a statement saying he knew nothing about junior scout Barry Bennell’s abuse of young footballers until his arrest in 1994. Photograph: Martin Rickett/PA

Crewe director of football Dario Gradi has released a statement saying he knew nothing about Barry Bennell’s abuse of young footballers until the junior scout was arrested in 1994.

Bennell worked with Crewe, Manchester City, Stoke and several junior clubs in the area prior to his conviction for raping a British boy at a football camp in Florida 22 years ago.

Three former footballers — Andy Woodward, Steve Walters and David White — have all come forward to report they were sexually abused by Bennell during their time in junior football, while a fourth player, ex-Tottenham and Liverpool midfielder Paul Stewart, says he was abused as a boy by a different coach.

Gradi, whose first spell as manager of Crewe ran from 1983 to 2007, said in a statement: “I would like to express sympathy to the victims of Barry Bennell not only at Crewe Alexandra, but at other clubs in the north west.

“The football club also co-operated fully with the authorities in 2003.

“The club are in the process of a review and I won’t be making any further comment until this is finalised.”

After the conviction in the US, Bennell was found guilty at Chester Crown Court in 1998 of 23 offences against six boys, aged from nine to 15, and was sentenced to nine years in jail.

The court heard that one of the assaults took place in Gradi’s house, though the court was also told there was no suggestion Gradi knew anything about it.

Bennell was given a further sentence in 2015 when he pleaded guilty to sexually abusing another boy at a camp in Macclesfield in 1980.

Woodward waived his anonymity from the Chester trial to tell the Guardian about his abuse by Bennell in the 1980s while he was at Crewe.

Woodward’s harrowing account prompted another former Crewe player, Walters, to tell The Guardian about his alleged abuse by Bennell on Tuesday, before Stewart told the Daily Mirror about his treatment by a different youth coach in the 1970s.

White also alleges it was Bennell who abused him as a youngster.

”In light of recent press stories, I wish to confirm that I was sexually abused by my former football coach, Barry Bennell, in the late 1970s and early 1980s,” said White in a written statement.

”This abuse took place while I was attached to Whitehill FC, a junior team based in Manchester.”

White’s decision to reveal his story came after Professional Footballers’ Association boss Gordon Taylor revealed the number of players to contact the union with similar stories in the last week had reached double figures.

Taylor was speaking after Cheshire Police said 11 individuals have contacted them as they expand their investigation into Bennell’s activities.

Shadow Sports Minister Dr Rosena Allin-Khan, the Labour MP for Tooting, issued a statement on Thursday which called for the Football Association to help tighten security checks throughout the game.

”I was alarmed to hear the news. Football pitches are supposed to be safe places for children and young adults to develop, not a hideout for sexual predators,” Dr Allin-Khan said.

”The FA need to look immediately at what action can be taken to ensure our children are being coached and supervised only by those who have their best interests at heart.

”We are at the stage now where simply relying on a criminal record check is not enough. 99.9 per cent of coaches and officials will have every child’s best interests in mind — but we must root out the 0.1 per cent who don’t.“

Stewart, speaking to the BBC, says he fears the scope of abuse in youth football could be akin to the widespread abuse perpetrated by former BBC presenter and radio DJ Jimmy Savile.

“I would almost guarantee (that the extent of it could be like the Savile investigation) as long as the victims are willing to come forward. That’s the key thing with this,” he said.

“My hope would be that it isn’t as widespread as the Jimmy Savile thing, then I’ll know not as many have suffered. But my belief is that there are hundreds (of victims).”

1 Paul Stirling’s heart over head decision to play on for Ireland bears fruit
2 Owens’s comments increase tensions ahead of FAI senior council meeting
3 Leo Cullen says rotation will be key as Leinster look to keep on winning
4 Sporting Cathedrals: Le Stadium - European fortress of the mighty Toulouse
5 Harding Park, named after a lousy US president who never stepped foot on it
Real news has value SUBSCRIBE
Crossword Get access to over 6,000 interactive crosswords