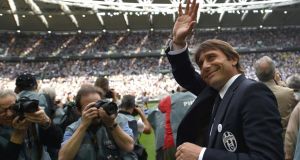 The decision of current Italian champions Juventus to part company with coach Antonio Conte has taken Italian football by surprise. Even if both parties were keen to stress that this is a consensual, non-contested divorce, the timing of yesterday’s announcement, on the second day of pre-season training, would suggest otherwise.

Most Italian (and non) football professionals acknowledge the 44-year-old Conte is one of the most talented coaches on the contemporary European scene. In three consecutive seasons with Juventus, he has been arguably the key figure in a post-Calciopoli (football scandal that prompted Juventus to be relegated to Serie B) renaissance that saw the “Old Lady” win three successive titles.

Given that Juve’s all-conquering domestic form throughout this period was not matched by anything similar at European level, most commentators would argue that Conte’s work with the club is only at the halfway point. Neither he nor club president Andrea Agnelli have ever made any secret of the fact that their ultimate objective was Champions League success or at the very least a good run in Europe’s premier club competition that would put Juventus back at the top, or close to, of the European tree.

In truth, there had been indications that not everything was hunky dory between coach and club right from the day last May when Juventus lifted this year’s Serie A title. In particular, many latched on to to one intriguing comment made by Conte when asked about “next” season:

We all presumed this was a reference to the tight purse strings at Juventus, a club that cannot even begin to match the spending power of the biggest Premier League clubs. For example, the ten year €940 million Adidas sponsorship deal just announced by Manchester United means that the sportswear giant will be paying the club three times as much per annum as they pay Juventus.

Many believe that Conte’s major point of difference with the club concerns this summer’s transfer market activities. The coach is believed to have wanted to buy the Colombia and Fiorentina forward Juan Cuadrado, as well as Chile and Barcelona striker Alexis Sanchez. Instead, Juventus presented him with 33-year-old Man United defender Patrice Evra, a splendid player but obviously someone at the end of his career.

Worse still, Conte is believed to have been concerned that Juventus might be considering a mega offer of up to €60 million from Man United for their Chilean midfielder Arturo Vidal. The departure of the Chilean, clearly one of the key elements in the recent Juventus success story, would obviously look like a “re-dimensioning” of Juve’s aims and ambitions.

In time, the reasons for this parting of the ways will no doubt become clear. Certainly, were Conte to suddenly land the job of coach at a major European club, that would provide an explanation. For the time being, however, there is no indication of such a move. Indeed, as of now, Conte’s name has been linked to only one job, that of Italian national team coach. Italy, of course, are currently without a coach, given that Cesare Prandelli resigned in the wake of their bitterly disappointing World Cup campaign in Brazil, where the exited in the group stages after defeats to Uruguay and Costa Rica.

As for a replacement at Juventus, it is a question of “round-up the usual suspects” with the currently unemployed Roberto Mancini (ex-Man City) and Massimiliano Allegri (ex-AC Milan) topping the list. In the meantime, Italian football can consider itself thoroughly rudderless with the positions of Football Federation president, of national team coach and of Juventus coach, all currently vacant. Keep your eyes open for employment opportunities in the small-ads section.