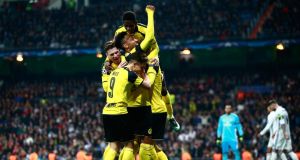 Real Madrid failed to win their Champions League group for the first time in four years when a late goal by substitute Marco Reus allowed Borussia Dortmund to equalise and clinch a 2-2 draw on Wednesday.

Zinedine Zidane’s side looked to be on their way to securing first place in Group F when Karim Benzema knocked in Dani Carvajal’s cutback in the 28th minute and the French striker stretched their lead by nodding in James Rodriguez’s cross in the 53rd.

Dortmund hit back on the hour with a close-range finish from Pierre-Emerick Aubameyang and a goal-line clearance from Reus stopped Cristiano Ronaldo restoring Real’s advantage shortly afterwards.

The Germany international, who had begun the game on the bench after falling ill on Tuesday, tapped in a low cross from Aubameyang to complete the comeback and score his third goal in two Champions League games.

Real equalled a club record of 34 games without defeat in all competitions but the late equaliser left a sour taste on what had been a night of celebration.

Dortmund finished top of the group with 14 points, two ahead of Real, who will play the second leg of their last-16 tie away from home for the first time since 2012/13.