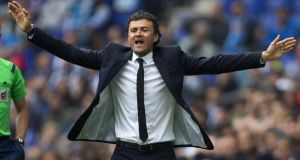 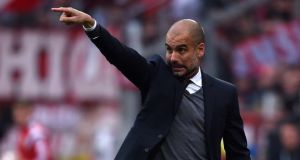 Bayern Munich’s coach Pep Guardiola Guardiola gets so wound up during the day of the match that he won’t eat. He spends the day glugging bottle after bottle of water. Photograph: Patrik Stollarz/AFP

Barça beat Córdoba 8-0 at the weekend. The team is humming, and its coach knows it. When Luis Enrique spoke about the draw for tonight’s Champions League semi-final, in which Bayern Munich face Barcelona, he spoke with pity about the team’s opposing manager. It was the worst possible fixture for him, he said. “If I think I was the coach of a team that has to face Barça I would say, ‘Bloody hell’.”

This opposing coach is different, however. He’s Pep Guardiola, and he returns to the Camp Nou as the coach of an opposition team for the first time since leaving Barcelona in 2012 after an unprecedented haul of 14 trophies in four seasons. His battle of wits with Enrique is the encounter’s fascinating subplot.

The pair has known each other for over 20 years. They were on Spain’s gold-medal winning football team at the Barcelona ’92 Olympics, and when Enrique left Real Madrid in 1996, it was Barça he joined, where he teamed up with Guardiola.

Enrique signed for the club in the car park at Barajas airport on the outskirts of Madrid. It was an inauspicious start to a successful eight-year playing career at the Camp Nou. He is still reviled in the Spanish capital as the only significant player from the club to directly cross the great divide to play for Barça.

The competitive, ascetic streak that runs through them both is noticeable. Guardiola gets so wound up during the day of the match that he won’t eat. He spends the day glugging bottle after bottle of water, and then gorges a huge midnight meal afterwards, which typically might consist of a salad, pasta, a bowl of potatoes, half a dozen Nürnberg sausages and a sirloin steak.

Conditioning is a cornerstone of both their philosophies, and diet may well be one of the keys to Barça’s rampant form this season. Charly Rexach, one of Barça’s directors, said in a Catalan radio interview in March that, “[Lionel] Messi ate more pizzas than he should have last year”. The Argentine has rarely looked so sharp, having shrugged off the sluggishness of last season, which Barça went without winning any silverware for the first time since the Guardiola era. He’s scored 51 goals this season.

Enrique has adjusted Guardiola’s possession-based style to include quick transitions when necessary, and particularly the long ball to Luis Suárez like his winner against Real Madrid in the clásico in March. His rotation policy in the first half of the season, in which he only used the same starting XI for two games running for the first time in late January, has also paid dividends.

Critics belittle Enrique, suggesting Barça is “Messi’s team coached by Enrique”, that the little man rules the roost. They had a public spat in January after Enrique left Messi out of the starting XI in a defeat to David Moyes’s side, Real Sociedad.

Enrique’s great achievement, however, has been his ability to gel Suárez, Messi and Neymar Jr up front, as several of Messi’s previous strike partners, including Zlatan Ibrahimovic, David Villa and Alexis Sánchez, failed to enthuse him. The trio have already surpassed the 100 goals scored by Messi, Samuel Eto’o and Thierry Henry in Guardiola’s 2008-09 treble-winning season despite the four-month playing ban that ate into the start of the season for Suárez.

Guardiola announced he was leaving Barcelona in April 2012. It was two days after being dumped out of the Champions League semi-final by an infamous rearguard action by Chelsea over two legs. He was a spent man. He’d been using tablets to help him sleep at night.

Guardiola’s mentor, Johan Cruyff, coined a phrase “el entorno” for the environment that engulfs Barça’s managers – the mix of malign forces, including fans, press and the hierarchy that runs the club. Guardiola got the job from Barcelona’s most successful president, Joan Laporta, who stepped down from the post in 2010 to pursue a career in politics.

Sandro Rosell, a one-time friend-turned-enemy of Laporta, took over the presidency. He did little to support Guardiola politically, who he derogatorily referred to as “the Dalai Lama”, particularly in Guardiola’s battles with José Mourinho during the Portuguese manager’s abrasive, three-year stint at Real Madrid.

Guardiola has said privately that he knew the end was coming for him at Barcelona when Rosell persuaded the club’s general assembly of members to take a legal action against Laporta for allegedly doctoring the club’s accounts. A judge dismissed the case in October 2014.

Guardiola also comes to the Camp Nou under pressure. He has marched easily to two Bundesliga titles but he knows ultimately his time in Bavaria will be judged on how he fares in Europe. His two predecessors reached three Champions League finals in four seasons, including one victory in 2013.

Guardiola has last year’s ignominious semi-final defeat to Real Madrid on his report card, and he has lost Arjen Robben and target-man Robert Lewandowski in last week’s clash against Borussia Dortmund.

Guardiola must be thinking he could do without having to face Barça next up.