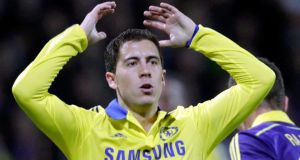 Chelsea remain unbeaten but their charge suddenly feels more of a stagger, the rhythm not quite as upbeat as it once was. This was a desperately unimpressive display against a team they had put to the sword last month, their season’s unbeaten record only salvaged by a late equaliser and victory passed up by Eden Hazard’s penalty miss. The travelling support’s vocal reminders to José Mourinho that his criticisms of the atmosphere back at Stamford Bridge will not go ignored merely added to an unfamiliar sense of angst.

Those in the away end had bellowed choruses of “José, give us a song” and “Sing up Mourinho” towards the end of a goalless first half as the visitors’ initial urgency gave way to a plod. If tongues had been in cheeks with that serenade then it was not immediately obvious. The point had been made and, while the team spluttered out on the pitch against a side nine points from the top of their domestic league, the timing felt apt. Qualification will have to wait.

The locals had thumped their drums behind Petr Cech’s goal through the opening period and bounced optimistically as one, all flags and flares, but this had initially felt like a mismatch in waiting from the start. So untroubled in possession were the visitors in the opening quarter that a repeat of the 6-0 mauling back in London a fortnight ago did not feel outlandish, Hazard tearing eagerly into a flustered Petar Stojanovic at right-back and the flurry of early chances all conjured by those in fluorescent yellow. Kurt Zouma squandered the best, his header from Cesc Fàbregas’ centre drifting narrowly wide of the angle of post and bar, but Chelsea clearly sensed Maribor’s vulnerability. Defensively, they looked the team struggling to make an impact in the Slovenian domestic title race.

Didier Drogba, on his 100th European appearance, might have pierced them only for Jasmin Handanovic to turn away a deflected attempt after slick approach play with Hazard. The locals squirmed at the ease at which they were being cut apart, though it was to their credit that they resisted, albeit rather fortuitously at times. Their coach, Ante Simundza, prowled his technical area barking instruction, Handanovic denying Hazard and Drogba once more but, as the half progressed, the more anxious of the two managers was actually Mourinho.

It was as if his team had been flummoxed by their inability to forge an advantage, the Portuguese’s pre-match warning that the thrashing at Stamford Bridge had actually been “a fake situation” ringing ever truer. The scowl he wore was hardly eased by the choruses offered up by around 640 travelling fans, most of whom were clearly unimpressed by the manager’s criticisms of the atmosphere at Stamford Bridge during Saturday’s derby victory over Queens Park Rangers.

He had cause for concern. Maribor’s opportunities were gleaned on the counterattack, often courtesy of Sintayehu Sallalich’s bursts down the flank or the bustling Marcos Tavares through the centre. The latter’s wriggling run through Filipe Luís, Nemanja Matic and Zouma might have earned a lead, Luka Zahovic forced wide by the Brazilian’s pass with his cut-back forced goalwards by Sallalich only for the young French centre-half to recover come poise and clear. Zouma was increasingly overworked, the backline stretched too often. Mourinho marched across the turf at the interval utterly unimpressed.

The sloppiness had been the most troubling aspect, a hangover from plenty of that second period against QPR and afflicting even previously stellar performers such as Fàbregas. Mourinho’s reaction was to fling on Diego Costa and Oscar for the diminished André Schürrle and Willian, though there was no instant reaction. Instead, Chelsea wilted. Maribor broke cleverly, Agim Ibraimi collecting Mitja Viler’s deep cross unmarked on the corner of the penalty area and curling a delicious shot over Cech and into the corner. Off went the firecrackers in celebration with the visitors undone and behind for the first time since 13 September.

All three substitutes had been introduced before the hour-mark as Chelsea frantically sought out parity, Costa twice blazing high into the stand when well placed even if, in truth, Aleksander Rajcevic should really have converted Ibraimi’s corner to extend the hosts’ lead. Quite how Zahovic contrived to sky Viler’s fizzed delivery from the left over the bar from inside the six-yard box defied belief, with Chelsea suddenly prone and that initial authority long since drained.

A set-play eventually offered salvation. Fàbregas’ centre was headed goalwards by John Terry and Matic strode in unchecked to tap in from virtually on the goalline. Anxiety was restored to the home side’s rearguard thereafter, with Hazard fluffing his lines from in front of goal at Costa’s lay-off and Handanovic summoning an outstanding save to deny the Spain striker’s volley in the frenzy that followed.

It was the Belgian who should have supplied the winner, initially liberated by Drogba’s pass and then tumbling over Viler’s outstretched leg. Yet his penalty was weak and easily blocked by Handanovic. In truth, his team did not merit a success. While the visitors skulked away, the locals celebrated this as a famous result.

1 Tianna Bartoletta: ‘After you’ve gotten your medal, you become black in America again’
2 Betting shops face uncertain future as they prepare for Monday reopening
3 Timo Werner giving up on Liverpool dream on path to being truly wanted
4 Ian O’Riordan: An education in race and running during college days in America
5 Kameko shocks Pinatubo in 2,000 Guineas at Newmarket
Real news has value SUBSCRIBE