Manchester City deny Roma and march on in Champions League 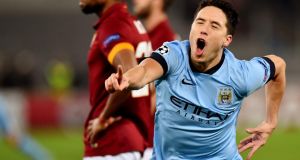 Samir Nasri celebrates his opener against AS Roma at the Stadio Olimpico. Photograph: Getty Images

There have not been too many distinguished nights for Manchester City since they started dining on the top table of European football but this victory can immediately be added to the small collection of great occasions.

A club with their ambitions never counted the Europa League as part of the masterplan and the second-half goals from Samir Nasri and Pablo Zabaleta have spared them from following Liverpool into the lesser competition. They have illuminated Group E only in short periods but that scarcely mattered in those jubilant scenes at the end of this match, having found their way into the knockout stagesof the Champions League, albeit through the back door.

Nasri may never have scored a better goal for City but this was a collective effort in which Joe Hart also excelled and Manuel Pellegrini’s men displayed a wonderful sense of togetherness given the background that has to be taken into account.

They came up against a shrieking, firecracking pit of noisy bias and they had to contend with a significant list of absentees running through the middle of their team in the form of Vincent Kompany, Yaya Touré and Sergio Agüero. David Silva, after his long layoff with a knee injury, was able to take a substitute’s role but City set out without their captain and outstanding defender, their best two midfielders and a striker who has been in blistering form to establish himself as the Premier League’s leading scorer.

This was always going to be a difficult assignment against the second-placed side in Serie A but, with so many key players missing, it was probably inevitable there would be spells when City lacked their usual authority.

What quickly became apparent was that Hart would have to show his best qualities if City were to stand any chance. Gervinho, so unrecognisable from the listless figure who was once on the edges at Arsenal, was a difficult opponent for Zabaleta, but he plays for Roma with a licence to roam and there were other times when he switched to the right and started to give Gaël Clichy the same kind of grilling.

Gervinho’s elusiveness and fast, direct style, coupled with the subtle touches of Francesco Totti, immediately started to cause problems during an early period of concerted pressure, before Hart’s goalkeeping gave City the platform to feel their way into the game. Pellegrini’s team had plenty of the ball in the first half but without any real menace and when James Milner did test Morgan De Sanctis with their first noteworthy chance it only launched a counterattack from which Gervinho hared away again only to be denied by Hart’s right glove.

The problem for City was that, without Agüero, they often do not have the penetration and movement in attack to trouble their opponents. Edin Dzeko looked short of full fitness, having just returned from a month out injured, and the Argentinian’s absence had deprived the team of their spark.

Of all the many permutations, they knew whatever happened they needed to score at least once, and there were moments here to remind us how difficult it may be for them to get by without Agüero during his rehabilitation from damaged knee ligaments.

There were, however, flickers of encouragement before half-time. Fernando and Fernandinho had established some form of control in the centre of midfield and, apart from Gervinho’s sporadic bursts of acceleration, they reached the interval looking relatively comfortable and reflecting on the moment, late in the half, when Jesús Navas slipped a clever pass behind the Roma defence. Milner duly got there first only for De Sanctis to deny him for a second time.

Nasri had been fairly restrained in the first half but it was a wonderful shot that put his team in a position of command. What should not be ignored as well is the little decoy run from Milner that helped to create the space from which the Frenchman cut inside. He was at an angle when not many players would have taken on the shot and he struck the ball with equal measures of power and precision.

Kostas Manolas had charged out of the Roma defence to try to block the shot but he was too late and Nasri’s effort, from just over 20 yards, was still rising as it went in off De Sanctis’s right-hand post. That was the Frenchman’s first goal of the season and it meant that Roma had to score twice to remove City from the second qualifying place behind Bayern Munich.

There was still half an hour to go but it was not long before the television cameras had picked out one of the Roma players on the bench covering his face in anguish.

Hart was grateful for Martín Demichelis’s clearance after missing a cross and leaving the substitute Mattia Destro with a chance to equalise. Yet Hart had shown his big-game qualities, the best of which turned Manolas’s header against a post, before City broke again and Nasri set up Zabaleta to fire in the goal that expunged any lingering nerves.

Brendan Rodgers says he was ‘really knocked’ by coronavirus 19:02
GAA preparing for earlier return to activity but pitches to remain closed 18:07
HRI announces full jumps programme up to start of August 17:03
La Liga season to restart on June 11th with Sevilla-Real Betis derby 16:26
Liverpool and Everton to oppose plans to play games at neutral venues 17:18

1 Farrell and O’Connell provide insight into changes in Ireland’s analysis
2 Brendan Rodgers says he was ‘really knocked’ by coronavirus
3 Sideline Cut: Vignette shows why Bird is the true shark in The Last Dance
4 Liverpool and Everton to oppose plans to play games at neutral venues
5 Niyi Adeolokun and Tom McCartney among Connacht departures
Real news has value SUBSCRIBE