Manchester City come of age as they take thriller against Barcelona 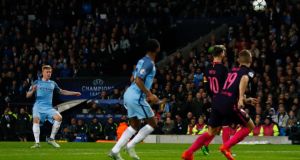 It was a thrilling, breathless night, full of everything that football should be, and when it was all done Manchester City could reflect on the kind of result they have desperately craved since the bags of gold came in from Abu Dhabi and the story of this club changed forever.

They had not only beaten Barcelona for the first time but they had done it the hard way, coming from behind, and they have spent so long waiting for this form of affirmation it automatically takes its place as the most gratifying win in the Champions League to date.

Any victory against a side featuring Lionel Messi, Neymar and Luis Suárez has to be cherished but perhaps the most jubilant aspect for Pep Guardiola’s team is what it showed about their competitive courage and the change in mentality compared to City’s previous attempts to overcome perhaps the most beautifully constructed club side there has ever been.

They had to withstand some awkward moments after Messi opened the scoring midway through the first half but if this was a test of nerve City passed with distinction. Ilkay Gundogan began the comeback as well as popping in their third goal and, in between, Kevin De Bruyne scored with a sumptuous free-kick.

There has never been a night when so many of City’s A-listers have reached the point of maximum expression and, finally, after six attempts, they know what it is like to play Barcelona and do the tormenting rather than the other way around.

The difference this time is that City did not seem to be weighed down by the kind of inferiority complex that has shaped previous encounters. True, there were difficult periods when Messi, Neymar and Suárez bewitched them with their speed, thought and movement. Nicolás Otamendi still does not seem to comprehend that the best centre halves tend to stay on their feet and Messi’s goal, following a stunning breakaway, left the overwhelming suspicion that the home side still lack a certain amount of knowhow defensively against the more refined opponents.

Yet City also played with a self-belief that has not always been seen in these fixtures. No one could accuse them of cowing in the presence of the team Guardiola describes as “the best” and they also had legitimate grievances given the moment, 11 minutes in, when Sergio Agüero set up Raheem Sterling for City’s first shooting chance and the Hungarian referee, Viktor Kassai, made the kind of mistake that felt incongruous for such a rich occasion. Kassai was badly mistaken to think Sterling had tried to deceive him into awarding a penalty. Samuel Umtiti’s left foot had come down on top of his opponent’s right one and Sterling’s exasperation was understandable when he rose to his feet to discover he was being booked for his troubles.

For a brief while, the soundtrack to the night became one of loud disgruntlement but too much was happening for the crowd to linger too long on the injustice and, if nothing else, at least that incident had encouraged the home side to think Barcelona’s makeshift defence might be susceptible.

The incredible part of what happened next was that City had six players, including both centre backs, in the opposition penalty area and a seventh, Pablo Zabaleta, actually behind the touchline when the shot from Agüero was charged down to set off Barça on the rapid, incisive counter-attack that brought Messi his 16th goal in his last 14 Champions League games against English opposition.

City’s adventure can be applauded in one sense but, in hindsight, it can also draw allegations of recklessness and the fact is Guardiola’s team were so hopelessly out of position that De Bruyne, playing on the left wing, was trying to fill in as an emergency centre half when Messi applied the decisive finish.

John Stones, Otamendi and Zabaleta – three-quarters of City’s usual defence – were on their way back from the other end of the pitch. Fernandinho, the team’s defensive midfielder, had also gone awol and the lesson for City is that no side can defend this generously and expect to get away with it. Messi played a remarkable one-two with Neymar spanning 60 yards and then slotted his shot past Willy Caballero with the minimum of fuss.

Perhaps in the past this would have been the moment when City lost their way and for a quarter of an hour it did feel like the game was threatening to take its usual course. Yet everything changed with the calamitous pass that Barça’s right back, Sergi Roberto, inexplicably aimed across his own half six minutes before the interval. Agüero was first to the ball, setting up Sterling with the opportunity to let fly. Sterling, coming in from the right, decided instead to play an extra pass and his ball was weighted perfectly for Gundogan to run in from the left and equalise.

Suddenly the home side looked reinvigorated. Guardiola had talked beforehand about Barça’s habit of “provoking mistakes” from their opponents but now it was happening the other way around, too. De Bruyne’s free-kick was a beauty, off the laces and dipping into the top corner, and the Belgian was superb during those thrilling passages when City attacked from every angle in their search for a more commanding lead.

There was an almighty scare when André Gomes thudded a shot against the crossbar but City were creating chance after chance and in the 74th minute the substitute Jesús Navas crossed from the right, the ball hit Agüero on his arm and Gundogan turned in the rebound while Barça’s players appealed for handball.

Competitive instinct will ensure sport returns as it always was 06:30
Ken Early: Despite coronavirus, Premier League season must be finished if at all possible 06:00
Summer tours next in line for postponement as rugby assesses options 05:00
Favourite sporting moment? It’s a bit like choosing your favourite child . . . 01:00
My favourite sporting moment: When Zidane glided through Brazil in 2006 01:00

1 Summer tours next in line for postponement as rugby assesses options
2 Ken Early: Despite coronavirus, Premier League season must be finished if at all possible
3 ‘Magnificent’ Conor Connelly remembered after sudden death
4 Favourite sporting moment? It’s a bit like choosing your favourite child . . .
5 Nicholas Quinn: ‘Swimming became how I dealt with grief’
Real news has value SUBSCRIBE