The striker hassled and harried before goading Nasri into red card 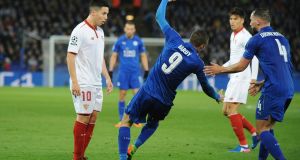 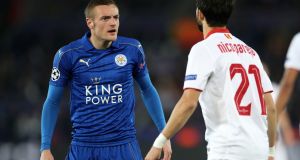 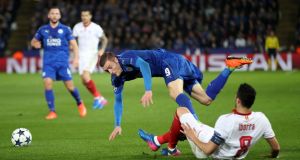 Towards the end of a relentless, slightly hysterical night at the King Power Stadium Jamie Vardy could be seen punching himself repeatedly in the face. It seemed in the moment absolutely fine; all things considered entirely the right thing to do. He had just scampered 40 yards in pursuit of Riyad Mahrez before whumping his cutback miles over the bar with the goal gaping.

Leicester were leading 2-0 at the time. A cool finish would have killed the tie. This was instead a crazed, dementedly adrenal finish. But still the only kind of finish Vardy was ever likely to produce on a night when his manic energy was the driving force behind the most significant stand-alone victory in Leicester City’s history.

Here’s a good stat. Vardy completed seven passes against Sevilla. It is a wonderful example of how a player’s impact can slip through the gaps between the numbers. In reality Vardy was a smothering, driving influence, harrying and snapping right across the Sevilla defensive line and at times in the first half dragging his team-mates forward from a standing start.

He was also awful. And nasty. And clever. Vardy didn’t score. He hardly found a team-mate, formed any coherent patterns, or did much that looked like what many people consider to be football. But Sevilla will have hated him by the end.

Samir Nasri had played with aristocratic assurance in the opening hour. He looked a likely candidate to finally break the Leicester defence with a pass or a jink as for a while after half-time the visitors pushed Leicester back almost to their own goalline.

At which point, enter Vardy again. It wasn’t fair. It wasn’t nice. It was, though, very funny in its own way, a moment where Vardy baited the hook, felt a tug on his line and then simply reeled his man in like a startled salmon.

Nasri had already been booked when he found himself drawn expertly into a forehead rutting exchange on the edge of the Leicester box. Nasri shoved just a little too hard, Vardy feigned shock and tumbled backwards. Both men were rightly booked, Nasri with an extra red. He looked not so much distraught as embarrassed as he was dragged from the pitch, soon to be followed by Jorge Sampaoli, the Copa América champ, a Barcelona target, disciple of the great Marcelo Bielsa, who here came off second best in perhaps the most mismatched managerial duel in the history of this competition.

Not that Craig Shakespeare really had to do much at the King Power. Before kick-off this open, untiered agreeably boisterous stadium was already crackling with the familiar unbound excitement of these midweek adventures. “Let slip the dogs of war,” was the message on a genuinely unnerving Leicester banner unfurled across one end, the words framing a huge cartoon figure of Shakespeare restraining a vicious attack dog.

It seemed unduly vicious but then in his brief time in charge Shakespeare has tended to suffer the slings and arrows of outrageous ham antiquation, with baffled hacks across the globe reaching for their Shakespeare Wiki-quote page to find some ill-fitting “Shakespeherian rag” from a play they’ve never read to encapsulate better his fascinating rise.

Talking of which … For the opening half-hour, just when his team needed it, Vardy was a rabidly hungry forward-hound – not perhaps one of your romping bouffant Crufts types, but a scrabbling little scoundrel of a mutt, pressing at full speed, dragging his team along behind him and drawing gusts of warm rumbling approval from the home fans.

Vardy it was who won the foul that led to Leicester’s opening goal, a veering run capped with what is now a trademark move: the slightly heavy touch, the spring to the ball, the half-pike tumble, face already contorted with injustice. The Italian referee saw enough of a genuine foul to give a free-kick. Mahrez whipped in one of his better set pieces and there was Wes Morgan at the back post to bundle the ball in off his thigh and open the scoring, nudging Leicester ahead on away goals.

Finishing purists might point out Morgan actually missed with his original choice of thigh, the ball smacking his standing thigh, and deflecting past Sergio Rico. But the goal was reward for one enduring Morgan virtue. He really does have massive, unmissable thighs, thighs that have fully bought into their role in life, which is carrying around the rest of Morgan.

Still those moments of Leicester-ism kept coming: Marc Albrighton’s precise low shot for the second goal, the tenacity of an unrelenting backline. And really Morgan was the other side of Leicester’s victory here. Almost exactly 10 years ago he was playing at Scunthorpe for Nottingham Forest in League One. Here he started scratchily, but by the end seemed to have become weirdly ubiquitous, a gristly substance spread across the whole of that Leicester backline. If Vardy provided the madness needed to drag this tie Leicester’s way from the front, Morgan was once again the heart of this team of makeovers and late-bloomers and upcycled parts who will now enter the Champions League quarter-final draw with nothing to fear and nothing to lose.