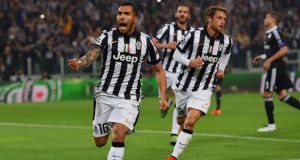 Carlos Tevez won and scored a second half penalty to give Juventus a 2-1 first leg lead over Real Madrid. Photograph: Getty

When Juventus needed a striker with ice in his veins, Carlos Tevez answered the call. This pulsating semi-final tie was balanced precariously when the Juventus striker tore into the Real Madrid penalty and was tripped by Dani Carvajal. The English referee, Martin Atkinson, was correct with his penalty award.

However Tevez’s heart pounded and whatever thoughts might have flashed through his mind as he addressed the kick, he found focus. This was pressure of the most extreme kind and yet the Argentinian never looked as though he would miss. He did not. This arena erupted. Juventus have something serious to take to Madrid.

On a evening laced with spicy sub-plots, Alvaro Morata, the Madrid-born, former Real striker - a substitute in the Spanish club’s Champions League final victory over Atletico last season - had opened the scoring. Incredibly, he refused to celebrate. Tevez had provided the assist.

But Madrid will not despair at the result. Their equaliser, inevitably, came from Cristiano Ronaldo - a close-range header - which was his 54th goal of the season. It also put him clear of Lionel Messi on the all-time Champions League scoring chart with 76. Real will rue the moment when James Rodriguez crashed a header against the crossbar on 42 minutes when he should have scored and, in the end, Tevez made the difference. Another thriller looms next Wednesday.

The tempo at the outset mirrored the raucous passion in the stands and, to the uncontrollable delight of the locals, it was Juventus that drew first blood. The pre-match suggestion of caution in the early stages was shot to pieces as Juventus came out seemingly intent on blowing the bloody doors off.

Morata’s goal was reward for their slickness and urgency although, from a Madrid point of view, it was a disaster. How Tevez, the most dangerous striker in Serie A, could have been allowed such space inside the area, from Stephan Lichtsteiner’s cute pass, was a mystery. Tevez did not wait to discuss the issue. He blasted low and unerringly for the far corner and, when Iker Casillas could only parry, Morata was on hand and onside to tap home at the far post. Cue a muted celebration.

Moments earlier, Morata had quickened the pulses when he spotted Casillas off his line and attempted a lob. For a split second, he looked to have outfoxed the goalkeeper yet it proved illusory. Casillas collected with ease. There had also been an incident at the very start when Casillas, under pressure from Tevez, miscued a clearance to Claudio Marchisio, who immediately found Arturo Vidal inside the area. Pepe snuffed him out and the home crowd’s appeals for a penalty were ignored.

Madrid kept their cool in the face of the storm and, gradually, they chiselled out a foothold. Ronaldo had blasted a fifth minute free-kick into the wall but, with Toni Kroos and Isco to the fore, the defending champions began to manipulate the ball with purpose. Kroos worked Gianluigi Buffon from distance; Raphael Varane headed over and Ronaldo, from Isco’s pass, sliced through the inside left channel only to drag his finish badly.

There was still the palpable sense of shock - and deflation - among the Juve fans when Real equalised. Rodriguez showed wonderful technique to guide in his cross from the right and Ronaldo merely had to apply a touch with his forehead from two yards. Madrid looked liberated and they ought to have led at the interval. A flowing move from right to left ended with Isco crossing for Rodriguez and he dived to head home. Somehow, from point-blank range, his effort crashed back off the bar.

Real cherished the weight of the away goal and Juventus knew that dynamic action was required in a second-half which, in contrast to the first, spluttered a little at the beginning. But it erupted into life and this new-build stadium rocked in old-fashioned style when Juventus muscled their way back in front.

Again, the Real inquest will be ugly. After a Kroos corner was cleared and Marcelo’s shot was blocked, Juventus suddenly broke with two-on-two. Marcelo cynically took out Morata yet Tevez scuttled on.

It was Carvajal’s responsibility to check him but he could not. Worse, when the full-back lunged into a tackle, he sent Tevez sprawling. Carvajal was fortunate to escape a yellow card and, had he collected one, he would have been sent off for a lunge at Morata on 78 minutes. Casillas could not read Tevez’s penalty.

Massimiliano Allegri switched to five at the back, with the introduction of Andrea Barzagli and Juventus put bodies behind the ball and on the line. Giorgio Chiellini was blooded and bandaged. The Juventus substitute, Fernando Llorente, ought to have added a third in injury-time but Italian hopes have nonetheless surged.