Claudio Ranieri dismisses fears over his future at Leicester 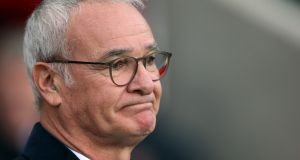 Leicester manager Claudio Ranieri has dismissed any fears over his future, but admits the club’s owner is not happy with their form.

Ranieri has left Jamie Vardy and Riyad Mahrez at home for Wednesday’s Champions League game in Porto as he looks to revive their Premier League season.

Leicester, who lost just three league games en route to a shock title success last term, have suffered seven defeats this season and are just two points above the relegation zone, but Ranieri is unconcerned about losing his job despite the dissatisfaction of chairman Vichai Srivaddhanaprabha.

“Never, because it’s not my decision,” the Italian said.

“The owner is always behind us, he always tells us how he can help us and is always positive. Of course he’s not happy – no one at the club is.

“When we win, we win together. When we lose, we lose together. My experience says it’s important to stay calm and be positive, believe in your players and do the best for your team.”

Mahrez and Vardy will not play at the Estadio do Dragao while Robert Huth, Andy King, Islam Slimani and Kasper Schmeichel have also not travelled as Ranieri looks to keep them fresh for Saturday’s visit of Manchester City.

Leicester have already qualified from Group G and are five points clear of second-placed Porto, who need to win to ensure they reach the last 16 ahead of FC Copenhagen.

Ranieri conceded if they needed victory in Portugal he would have taken a stronger squad, but is happy to hand his fringe men a chance, with Demarai Gray, Leonardo Ulloa and Marcin Wasilewski expected to play and 18-year-old midfielder Harvey Barnes in the group.

He said: “If we had to win, maybe all my players would be here, but I can choose. Always I have said we have a very good team. There are some players who didn’t play so far – they deserve their chance to show their potential.

“The players who can play have a chance to play on Saturday. We have three matches every three days now and I need all my players.

“When you don’t do well or you lose, the critics must be negative, but inside we must be very balanced. Saturday will be another fantastic match, against another big team and in this match [against Porto] I could choose some players and rest the others.

“I love people who in difficult situations react and I have fantastic players. I am sure we will react very well.”

Danny Simpson is one of the players who could keep his place and the right-back believes the Foxes’ shadow squad can prove themselves on Wednesday.

He said: “It’s a great chance for the players to show him [Ranieri] and the rest of the boys what they can do, away from home, at a great stadium and against a great team.”