Former Celtic striker now plies his trade in Cyprus, where his goals have proved crucial to Apoel Nicosia 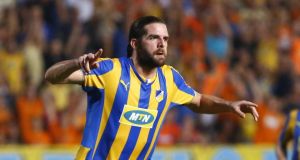 It’s almost six years since Cillian Sheridan made his Champions League debut for Celtic at Old Trafford and while he left a year or so later and the Scottish club has enjoyed some great nights in the competition since, it is the 25-year-old striker who has the active interest in this afternoon’s draw for the group stages rather than his former club.

Sheridan has been around the block a bit since then with various loan stints in Scotland and one that was supposed to be more permanent in Sofia, but the last year has been spent in Cyprus with Apoel Nicosia where his goals were crucial in getting them back to the big time.

“I definitely feel more a part of it this time,” he said yesterday, having scored the last one of four in the home win against Danish side Aab that put the Nicosia outfit through.

“As a 19-year-old with Celtic I probably didn’t appreciate just what a big deal it was to be in the competition and I was only a young lad sort of coming into the team but this time I’ve played my part in getting the side there and feel much more like one of the team.

“It’s good; the build-up to the game last night really brought it home just how important this all is; it’s the pinnacle of the club game.”

Sheridan still manages to sound relaxed about it all and, asked about who he is hoping Apoel get this afternoon, mentions Real Madrid and Barcelona before pausing and admitting that he hasn’t thought about it much. The club and its fans, though, are, understandably enough, rather more worked up about being back in a competition they created a minor sensation in a couple of years back by reaching the quarter-finals.

They had high hopes of qualifying last year too but started the season very slowly. Sheridan, who had been signed by former Hearts manager Paulo Sergio, took time to find his feet and admits he feared it might prove to be a very difficult year when the Portuguese was sacked and replaced by Giorgos Donis from Greece.

“Well, yeah, for the first few weeks after he arrived I wasn’t getting into the team at all and of course it crosses your mind, but I kept working hard and when the manager gave me my chance he stuck with me; I started to get a bit of confidence going and I think if you ask any player they’ll tell you that that’s the most important thing you need if you want to be playing well.”

Remarkably, Apoel turned a season that had seemed to be on the brink of fizzling out completely into a double-winning campaign with their Irish striker earning hero status amongst the supporters after completing his own revival with the first goal in a 2-0 cup final win and the only one in the game that ultimately decided the title.

“They’re a very friendly people and they made me feel welcome from the start,” he says with just enough hesitancy to suggest an awareness of the fact that some were questioning his ability during the goal drought. “But when things fall into place on the pitch, everything else sort of just follows and I’m really enjoying my time here now.”

His initial contract was one year with an option for a second and Apoel, it seems, don’t throw long-term deals around, for both he and Donis will, as things stand, be free to leave in the summer. However, Sheridan insists he is happy to see how things pan out for him at the club over the coming months.

Any sort of success in the Champions League might, he hopes, help him to add to his tally of three caps although he admits that he has some work to do to catch Martin O’Neill’s eye. “The squad he (O’Neill) named there last week was a big one wasn’t it, so it’s pretty clear that I’m not too close as things stand but then you can’t expect somebody to name you in a squad if they aren’t seeing you play so I’m not at all surprised or disappointed.

“This is an opportunity but it will take more than just being in a team that’s playing in the Champions League, I’ll have to do well myself, but obviously I hope that that’s what  happens and it would be really nice to think that I could be involved again.”

In the meantime, the media attention that has come with being the only Irishman likely to play in the competition’s group stages this year is clearly causing him some amusement. He tweeted yesterday that it would be on his gravestone. Not if Apoel’s fans have anything to do with it and not, one suspects, if he continues to build on last season’s remarkable success.