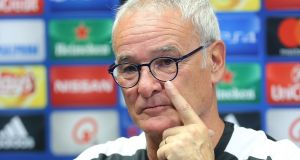 The most revealing moment, perhaps, came in the small, airless room beneath the Jan Breydel Stadion where Wes Morgan was asked whether Leicester City, preparing for their first experience of the Champions League, could confound everyone again by winning the damn thing. “Why not?” Morgan asked, doing his best to sound like he meant it and unaware that, sitting in the seat to his right, Claudio Ranieri was trying, and failing, to keep a straight face. Leicester’s manager seemed to find the idea hilarious.

It was after Morgan had left that Ranieri said: “It is good when my players believe in something. We wrote a fantastic fairytale last season. Nobody, even us, believed it could be possible at the beginning. But there are so many big teams in the Champions League. It is impossible.”

And, in theory, who could possibly argue? Already, there are signs a little bit of the magic has worn off. Leicester, beaten only three times in the Premier League last season, have lost two of their four games as champions. Except the strangest thing of all is, this being Leicester, there is always that tiny seed of doubt for anyone wanting to write them off.

Ranieri summed it up best and suddenly it sounded as though he might agree with Morgan after all. “I say it is impossible,” he said, “but Leicester have shown the impossible is possible.”

Can they do it? Or is it even a fair question as they step into a brave new world with an opening assignment against Club Brugge? Ranieri grimaced when that was put to him that Leicester are the favourites to progress from their group.

By now we should be accustomed to Ranieri playing down expectations and the press-conference tactics of a man whose team were squatting defiantly at the top of the Premier League last season while he was looking everyone in the eye and insisting his only ambition was to get to 40 points and stave off relegation.

On this occasion, however, it did not feel like such an act to hear him saying he would be satisfied merely to finish third in Group G and qualify for the Europa League. Since 2002, only nine out of 46 teams playing in the Champions League for the first time have qualified for the knockout stages.

Leicester have certainly been placed in an obliging group: nice cities for supporters to visit and three teams who won’t inspire trepidation. Brugge are 10th in the Belgian league, while Leicester are 16th in the Premier League. Early days, of course, but Ranieri’s team will begin their new adventures in a stadium only two-thirds full, with an expected crowd of around 20,000. Guardian Service