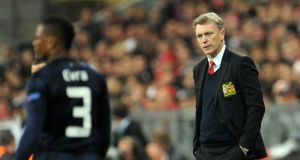 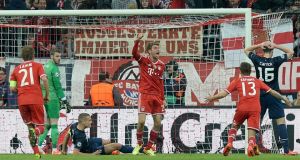 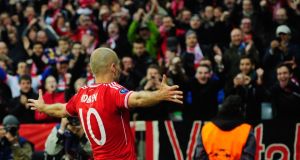 
The most disappointing part for Manchester United is that, briefly, they had this game under their own control. They ought to be anguished by the speed at which everything unravelled and it will be almost 18 months, or possibly longer, before they get another chance to get it out of their system.

Bayern certainly showed their competitive courage once Patrice Evra had stunned everyone with a cannon of a shot, but there was still the unmistakable sense that United played a considerable part in their own downfall. This was not Bayern at their indomitable best, or even particularly close to it, but David Moyes’s team crumpled in that last half an hour in a way that felt completely out of synch with everything that they had shown before the opening goal.

Bayern equalised in their next attack through Mario Mandzukic’s header and United lost all their defensive poise in those moments, when Thomas Muller gave Pep Guardiola’s side the lead and Arjen Robben eluded Evra and Nemanja Vidic to soothe any lingering nerves among the home crowd. Three goals had arrived in 17 minutes and, for United, it was made even more galling bearing in mind what had happened in the first two-thirds of the match.

It was probably just inevitable there would be long spells when United had to defend in numbers. Even the mosaics here are intimidating. “Kings of the Cup” was the message held up in thousands of pieces of red, purple and white behind one of the goals.

Yet it also quickly became apparent this was not going to be a night when Bayern simply swatted aside the Premier League’s seventh-placed team. Arsene Wenger’s view is that Bayern are not quite as brilliantly accomplished now as when Jupp Heynckes was in charge and, though that was dismissed at the time as sour grapes after Arsenal had been eliminated, maybe there is actually something in that.

Bayern may have won the Bundesliga in record-quick time this season but, for all their strengths, the old sheen of invincibility is not always so obvious these days when put in context with that stunning 7-0 aggregate win over Barcelona in last season’s semi-finals.

At times, they were even bordering on the predictable, feeding the ball to Robben over and again, and relying on his ability to run at defenders, cutting in from the right.

There were plenty of occasions when Robben had his opponents on their heels but it was unusual in those moments to see Guardiola’s team looking a little short of other ideas. Franck Ribery was strangely subdued in the early parts when Moyes was certainly entitled to be encouraged about the way his players set about the game.

Whatever their problems this season, however many times they have strayed dangerously close to full-on crisis, United have actually put together a distinguished away record.

Their basic structure was good, with two midfielders in deep-lying positions and wingers who were willing to double up as full-backs, and the players in support of Wayne Rooney were quick to join him on the occasions when they did have the ball in promising areas.

Rooney, playing at the spearhead of their attack, was an elusive and difficult opponent for the two centre-halves, Dante and Jerome Boateng, and they also had the ball in the net in the first half, only for a linesman’s flag to deny Antonio Valencia the opening goal.

Bayern were missing Javi Martinez and Bastian Schweinsteiger among others but, then again, United had a considerable list of their own absentees. Moyes could be seen leaving his dugout at one point of the first half to remonstrate with Darren Fletcher for losing the ball in a dangerous position but that kind of carelessness was kept to a minimum. Or it was until they actually had the temerity to take the lead.

Until that point Vidic had played as though determined to remind everyone that he will be badly missed at Old Trafford next season. Chris Smalling had justified his selection ahead of Rio Ferdinand and, for the most part, Phil Jones had not allowed Ribery to play with the usual menace.

Ribery did, however, play a considerable part in the goal. It was his cross, from the left, that picked out Mandzukic and the Croat had a clear height advantage on Evra as he directed his header into the bottom corner.

Evra’s goal was an absolute peach, struck first-time from fully 25 yards and still rising as it flew into the top left-hand corner of Manuel Neuer’s net. Valencia’s cross from the right had eluded everyone. It was an unstoppable finish and, at that stage, the small but boisterous group of away supporters could dare to imagine an improbable victory.

Unfortunately, at this level a team will always be punished for defending with such fragility. Muller got away from Vidic for the second Bayern goal, turning in Robben’s cross from the right, and the Dutchman’s solo run and finish ensured the home side could relax through the final exchanges.

They will go into a third successive semi-final while United are left to wonder when they will renew acquaintances with this competition.
Guardian Service