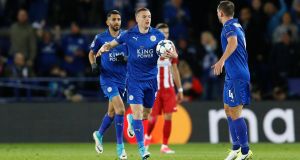 Leicester City’s Jamie Vardy brings the ball back to the halfway spot after scoring. Photograph: Reuters

For Leicester City, it was the end of the adventure. It has been an epic run, they have had some great fun and they will cherish the memories but, ultimately, they just came up short and the Champions League will go on without any English side in the semi-finals.

They certainly gave it everything they could during a second half of tremendous spirit and if nothing else, they reminded us of their better qualities in that period when they pinned Atlético Madrid back and, briefly, gave the clear impression they genuinely believed they were capable of pulling off an almost implausible feat of escapology.

Craig Shakespeare’s tactical changes at half-time, becoming the latest Premier League manager to experiment with a three-man defence, led to a significant improvement after the interval and a goal from Jamie Vardy turned the volume high and created some prolonged anxiety for Diego Simeone’s team.

By that stage, however, the damage had been inflicted in the form of the first-half header from Saul Ñíguez that gave Atlético a 2-0 aggregate lead and the considerable advantage of an away goal. Atlético will have a better understanding now why Leicester won their domestic league last season but in the end the joy belonged to the side that is going for their third final in four seasons.

The only team to have got the better of Atlético in this competition during that time is Real Madrid and perhaps, in hindsight, it was a mistake on Leicester’s part to operate with so much restraint in the first leg. Hypothetical now, but what a difference it might have made if they had conjured up a goal at the Vicente Calderón. Instead, they could not even manage an attempt on target – or in the case of Vardy a single pass – and their failure to score in Madrid always left them vulnerable.

All of which meant that Ñíguez’s expertly placed header, 26 minutes in, put Leicester in the unenviable position of knowing they would need to score at least three and that has not happened against Atlético since they lost at Olympiakos in September 2014. Leicester always needed something special but the opening goal left the Spanish club in a position of strength they were never likely to relinquish.

Naturally Leicester’s players never stopped running, trying everything they could to unsettle their opponents. At this level, however, it needs more than that. Leicester would not have scored highly if points were awarded for wit, creativity or refinement. Too many passes were misplaced. If anything the home team looked too eager at times and to stand any chance it seemed imperative that Riyad Mahrez and Vardy replicated the level of performance that saw them dominate last season’s English player awards.

Both had a lot more of the ball than the first leg – when the Spanish sports daily AS refused even to give them a mark – but they could not always do a great deal with it until the tactical switch in the second half.

Mahrez was also partly culpable for Ñíguez’s goal bearing in mind his half-hearted attempt to close down Filipe Luís before Atlético’s left-back swung over the cross. The midfielder eluded Marc Albrighton and Christian Fuchs before making the decisive connection but it would be wrong to dwell too long on the defender when a goal has been scored with this expertise. As headers go, it could hardly have been executed more stylishly. The neck muscles were strained, the cross thudded back off his forehead and the ball was still picking up speed as it bounced past Kasper Schmeichel.

Shakespeare responded at half-time by bringing on Leonardo Ulloa and Ben Chilwell in place of Yohan Benalouane and Shinji Okazaki and switching to a 3-4-3 system that was designed to ramp up the pressure on Atletico’s defence. Chilwell and Albrighton took on the wing-back roles while Mahrez moved alongside Ulloa and Vardy into a new-look forward line.

Almost straight away, they had a more threatening edge. Mahrez, in particular, seemed to be invigorated in his new role and just after the hour they were rewarded for their sense of adventure. Albrighton’s cross created the danger, going all the way through to Chilwell and leaving the substitute with a chance to let fly with his left foot. The shot was blocked but the rebound spun conveniently towards Vardy, six yards out, and it was a clever follow-up effort to turn the ball past Jan Oblak.

It is rare to see Atlético look as rattled as they did during the onslaught that followed and Vardy could conceivably had a second seven minutes later when the ball reached him in the penalty area again. Stefan Savic, the nearest defender, managed to block a goalbound shot but these were uncomfortable moments for la Liga’s third-placed team.

Leicester fought to the end, losing Wes Morgan to a hamstring injury in the process, and Kasper Schmeichel played most of the stoppage time as an outfield player. They needed two goals and they had only four minutes. Not even Leicester, with their heroic story, could provide one last twist.