Sexism a lot more insidious than the likes of Tyson Fury 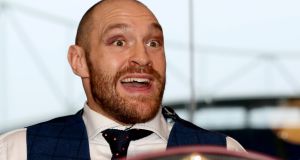 Tyson Fury: “Holding him up as some totem of sexism would be like holding the KKK up as the face of race problems in America.” Photograph: Simon Cooper/PA

Don’t sign that Tyson Fury petition. You have better things to be doing with your day. And if you don’t, it’s not hard to find something. As Malcolm Tucker might suggest, maybe go off and set up a committee to count the moon. It will have just as much impact.

The latest news is the head of the BBC Tony Hall will have to answer to the Culture Committee of the British parliament next week over Fury’s presence on the shortlist for Sports Personality of the Year. That’s actual MPs grilling the actual director general of the BBC on the right of an unpopular man to be put forward for a popularity contest.

And we thought our crowd had little to be at!

By comparison, the Lord Mayor of Dublin getting the Mexican ambassador involved in the Garth Brooks thing looks like the very epitome of statesmanship.

Grand gestures might make you feel better about your own right-on credentials but they don’t make a whit of difference in everyday life.

To really get a handle on the sexism faced by women in sport, we first have to understand what it looks like.

Here’s what it isn’t – a witless fool like Fury saying that a women’s place is in the kitchen or on her back.

Holding him up as some totem of sexism would be like holding the KKK up as the face of race problems in America.

But actual, deeply ingrained sexism is a far stickier subject because it causes us to question our day-to-day way of thinking.

When Derval O’Rourke missed out on the RTÉ Sportsperson of the Year Award in 2006, it was mainly down to the casting votes of a panel of judges who didn’t really have a rashers who she was or what she had done.

Ted Walsh said he didn’t even know about O’Rourke until a few months previously. George Hook said he didn’t want to celebrate coming second, even though O’Rourke had a world indoor gold to go along with her European silver that year.

It was a shambolic bit of television that left O’Rourke swinging in the wind as Henry Shefflin took the award.

Changing that sort of thinking if a far more helpful use of our time than trying to get Tyson Fury taken off a list.

The more women’s sport you cover, the greater number of small, casual bits of sexism you come to see.

Last Sunday I was at the women’s club All-Ireland football final and, after I tweeted a few score updates during the game, one charmer came on with the ever clever, “Slow day in the office??”

A couple of months back, a dozen or so GAA hacks landed out at Parnells clubhouse in north Dublin for an AIB gig to publicise the club championships.

James O’Donoghue was there, so was Pádraic Maher. Also on the bill was Aisling Thompson, captain of the All-Ireland-winning Cork camogie team.

When we were finished talking to O’Donoghue and Maher, the PR man organising the event asked how many of us wanted to talk to Thompson. Most of our cohort made their excuses and left.

“The desk won’t take anything off me,” one of them explained, not unreasonably, in relation to Thompson.

By the time she came in, only three of us remained.

Predictably enough, she was by far the most interesting interview of the three.

Changing that sort of thinking is a bigger job and it’s a harder job and it will take more than clicking on a link in your Twitter feed. Leave Fury on the SPOTY list. Ignore him. He’s a lunk, with some fairly caveman views of the world but if you’re looking to a sportsperson for tips on how to live your life, you will likely get what you deserve.

After all, last year’s winner was the tax exile Lewis Hamilton and there wasn’t a word about it.

So if you think you’re taking some sort of principled stand on Fury, don’t bother. Save your energy for the smaller stands that are far more important.

1 It’s shocking how men have driven women away from exercising in public
2 Ireland 23 Georgia 10: How the Irish players rated
3 Ken Early: Maradona’s wonder goal a monument to lost freedom
4 Nicky English: No surprise that Limerick and Waterford in final
5 Sordid murder of hurling brothers still resonates in south Galway
Real news has value SUBSCRIBE
Here is your handy guide to sport on television this week