Rugby family has shameful past in propping up apartheid regime 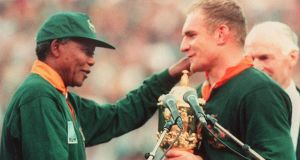 There was a lovely moment, or indeed minute, before kick-off in the Munster-Perpignan game at Thomond Park on Sunday. It only required one clap at the outset of the minute’s silence in honour of Nelson Mandela for it to become a minute’s applause, and that was more fitting, for last week became as much a celebration of his extraordinary life as anything else.

The previous Thursday, the IRB paid tribute to Mandela on behalf of the “rugby family”, recalling how he had utilised the once-divisive Springboks as a means of unity for the Rainbow Nation at the victorious 1995 World Cup final in Johannesburg. The IRB chairman Bernard Lapasset said: “I am so proud the rugby family could play its small part in supporting Mr Mandela’s efforts to establish the new South Africa and that our tournament came to symbolise the emergence of a new nation.”

If ever a moment gave the lie to the old cliché that sport and politics don’t mix, Mandela wearing that replica number 6 Springboks jersey and handing the William Webb Ellis trophy to Francois Pienaar is it. Naturally, the statement made no mention of the rugby family’s previous and shameful contribution toward propping up the apartheid regime.

The Afrikaner Broederbond (Brotherhood), a secretive, powerful elite that ran the country’s key institutions (and contained members of the South African Rugby Board) helped choose Springbok captains, just as they chose military commanders and prime ministers. “Rugby was always seen as apartheid at play,” said Andy Colquhoun, a leading South African commentator, prior to World Cup 2007 in France.

All Black Tests
Significantly therefore, during the 28 years Mandela was incarcerated, the All Blacks played no less than 15 Tests against the Springboks. The 1976 All Blacks tour of South Africa went ahead shortly after the Soweto riots, despite international condemnation, and 28 countries boycotted the 1976 Summer Olympics in protest.

The Springboks’ 1981 tour of New Zealand went ahead in defiance of the Gleneagles Agreement, but the massive civil disruption in New Zealand (causing the cancellation of two games and memorably disrupting the third Test by dropping flour bombs from a plane) helped ensure there would not be another Springboks tour anywhere before Mandela was released.

Four years later, the New Zealand anti-apartheid movement successfully challenged the proposed 1985 All Blacks tour of South Africa, although within a year all but two of the squad (the honourable exceptions being John Kirwan and David Kirk) toured South Africa under the guise of the ill-suited moniker The Cavaliers, with Colin Meads as coach.

What makes this even worse is New Zealand, like other countries, had felt obliged to exclude non-white players, such as George Nepia and Jimmy Mill from the 1928 All Blacks tour, and had dropped Ranji Wilson from the New Zealand Army team nine years beforehand. The planned 1967 tour by the All Blacks was cancelled by the New Zealand Rugby Football Union after the South African government refused to admit Maori players. In 1970 the All Blacks toured South Africa once again after the South African government now agreed to treat Maoris in the team, and Maori spectators, as “honorary whites”.

Imprisoned
During the 28 years Mandela was imprisoned, South Africa remained a fully-fledged member of the IRB, and all the major rugby playing nations of the world played the Springboks. The British & Irish Lions toured there three times, New Zealand, Australia, Argentina and England all toured there twice, while France toured there five times, and Wales, Italy and Ireland once each.

Tommy Bedford, who played for the ’Boks on that 1969/70 tour and would become a key figure in the sporting reconciliation that led to South Africa’s return to the sporting arena, subsequently recalled: “We spent all our time surrounded by police cordons and barbed wire, never mind having our bus hijacked (on the morning they played England at Twickenham), and then in Dublin, being confronted by demonstrators lying in the street to stop us getting to Lansdowne Road.”

Yet the IRFU sanctioned a seven-match, two-Test tour to South Africa in 1981 (a year before Mandela was transferred from Robben Island to Pollsmoor prison in Cape Town) when ignoring a letter from the then Taoiseach Charles Haughey not to tour. As a protest by the government, President Patrick Hillery did not attend the Ireland-Australia game the ensuing November.

Hugo MacNeill, Tony Ward and Donal Spring refused to tour on conscientious grounds. Moss Keane, a teacher, and Ciarán Fitzgerald, ADC to President Hillery, declined to give up their jobs to do so, although John Robbie and Ginger McLaughlin did, with Robbie returning there to set up home (as did Freddie McLennan) and become a non-capped ’Bok.

1989 World XV
In 1989, a World XV sanctioned by the IRB (even though Mandela was still imprisoned) undertook a mini-tour of South Africa. All the major rugby nations bar New Zealand supplied players to the team with 10 Welshmen, eight Frenchmen, six Australians, four Englishmen, one Scot and one Irishman, namely the hooker Steve Smith, while Willie John McBride was tour manager.

No sport propped up apartheid in South Africa more than rugby which is why protests and sporting boycotts became an instrument for change, after which, rugby would become a key symbol for unification within South Africa. But while allowing for some honourable exceptions, that was not so much thanks to the rugby family as to one utterly remarkable man.
gthornley@irishtimes.com