Six Nations: Ross and Healy come into the picture 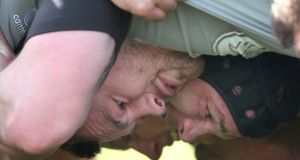 Frontrow view: Cian Healy and Mike Ross are both back in training. Photograph: Dan Sheridan/Inpho

The possible arrival of Leinster’s Cian Healy and Mike Ross into Joe Schmidt’s Irish squad will add strength to a struggling scrum. But Healy may arrive in camp with little recent frontrow work under his belt.

Until yesterday the loosehead prop had been doing prescribed running and had not fully participated in Leinster training.

While he will crank up the participation this week, it is yet to be seen how his body will react to a heavy workload.

Healy had elective knee surgery in early January to coincide with serving a two-week ban for foul play against Toulon.

Leinster tighthead prop Mike Ross, who has recovered from a torn hamstring, seems to be further along the road towards playing.

“Cian Healy is good. He did some running on Sunday. He didn’t fully participate in training,” said Leinster assistant coach and former Ireland fullback Girvan Dempsey

“He came through that . . . We’re hopeful he can increase the volume of [work] and participate in some scrummaging. Mike Ross did a full session on Sunday and has no ill-effects from that. Thankfully, he’s back in the fold.”

Dempsey added that if Healy was not required for Ireland’s match against France on Saturday in Paris, Leinster would look to him for their Pro12 League match against Zebre on Friday night at the RDS.

“Oh yeah. Most definitely,” said Dempsey, when asked if Leinster would play Healy if Ireland did not.

Dempsey, who played many times in Paris during his 82-cap international career, believes that the French, under coach Guy Noves, remain brittle if Ireland can begin as strongly as they did against Wales on Sunday in Dublin.

“I think so,” said Dempsey. “They [France] are still a very new squad. They’re still gelling. I still think there are a lot of weaknesses that that can be exposed.

“If the French get their tails up, once they get a lead, it’s always hard to claw it back in Paris. They showed glimpses of what they could do.

“The Italians were excellent at what they did; a bit more composure and they could have won that game.”

What Schmidt is thinking and what will be factored into the selection for Paris is the shorter turnaround of six days, compared with seven for France, enough to be a significant consideration.

“It is going to be a big challenge for Ireland to try and get that recovery and get guys back on their feet, up to speed and back on the field as quickly as possible,” said Dempsey. “France, no doubt, will improve this week and they have that extra day.”

Fergus McFadden, who hopes to play his way back into favour with Schmidt, agreed that the physical aspect against France will be pivotal.

“That extra day for the French will matter,” said McFadden. “I think just watching the coverage yesterday, Shaggy [Shane Horgan] described a game of that intensity at Test level as basically like coming out of a car crash, so when you’re trying to recover from that, 24 hours is a long period.”

Leinster utility back McFadden has not been in the camp at Carton House, having been told by the Ireland coach that he would not be required for the first two weeks of the competition.

“After this week, we’ll see what happens,” said McFadden.