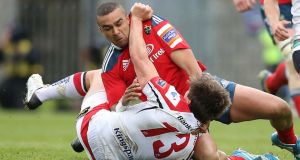 Simon Zebo in action against Ulster at Thomond Park, Limerick. The Munster winger will start against Glasgow on Friday. Photograph: Inpho

Munster have been given a boost ahead of Friday’s RaboDirect Pro 12 semi-final away to Glasgow Warriors with winger Simon Zebo declared fit to play.

Zebo came off with an ankle injury in Saturday’s dismal loss at home to Ulster but coach Rob Penney yesterday confirmed that the winger has made a full recovery.

Penney said they had not picked up any new injuries as they prepare to become the first side to win an away league semi-final since the play-offs were introduced four years ago.

Penney said there were no issues around JJ Hanrahan’s fitness but confirmed that full-back Denis Hurley, who missed the loss to Ulster, is out with an Achilles injury.

The Munster coach said that there was still no timeline on when lock Donnacha Ryan will return but it remains highly unlikely that he will be available for the Irish tour to Argentina.

“He’s going to see a specialist, to have another opinion,” said Penney, who added that his men are not paying much attention to the stat that an away team has never won a semi-final.

“Records are there to be broken, aren’t they? The record’s a daunting one but no, you don’t. You never look at those sorts of things. I’m not a massive believer in going in there with a different philosophy whether you’re home or away. There’s 15 guys playing on a grass trip 100 by 70 and away you go.

“I suppose it just does really emphasise the home advantage component. It’s small margins and some teams do perform a lot better at home and we might have been like that a month ago.”

But Penney does expect an edge to Friday’s proceedings and while they lost 22-5 at home to Glasgow in April, they won 13-6 in a fiery contest in Scotstoun in October in a game where there was an allegation of Donncha O’Callaghan being bitten.

“That happened in game, I wouldn’t want to dredge that up; it was one of those incidents that may or may not have happen.

“There was a bit of banter between their supporters and some of our reluctant players as they came off, trying to shepherd themselves into the alleyways and that’s sort of the cauldron that Scotstoun is going to be this week.

“They have strategically picked the time so that there is going to be plenty of food on board, 7.35, and it is going to be an interesting environment for us no doubt. That just goes back to the home advantage, we’re just going to have to deal with it and so are the officials,” added Penney.

This clash could be Penney’s final game in charge of Munster before he heads to Japan but he hopes it doesn’t end in Glasgow.

“Jeepers that would be very disappointing to have it end on that note but it’s got to end at some point. That’s the reality of the competition and only one team’s going to go through on Friday night. Whether it’s fear, whether it’s passion, whether it’s inspiration from the joys of playing the game, people will get their motivation from their own purposes. The hope is that they draw on that, whatever they draw on, and can give Glasgow a really good, hard game and make it a legitimate contest,” added the Kiwi.