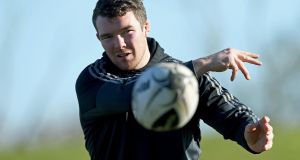 Peter O’Mahony: may only be back from injury for the week of the Guinness Pro12 final next month. Photograph: Donall Farmer/Inpho

Peter O’Mahony is unlikely to be part of the Ireland tour to South Africa in June, with Munster coach Anthony Foley saying he expects it to be September before he returns to competitive action.

O’Mahony said in January that he had high hopes of being back in April or May from the knee ligament injury suffered against France which ended his World Cup campaign.

However, Foley said O’Mahony would, at best, only be coming back the week of the Guinness Pro12 final next month.

“Our physio is saying week 48, which is the Pro12 final week. So that’s him with no games, and that’s if everything’s going well,” he said.

Foley said the Irish medical team were aware of the position. “Well, they’re all the same people basically. Everyone’s aware of it, but I think everyone’s kind of seeing how important Peter is and everyone wants to get him back as quickly as possible. We’re no different, we’d love him back, but unfortunately at the moment he’s still rehabbing.”

Asked if he thought the 26-year old would not be seen in a competitive match until the season kicks off in September, Foley said: “Yeah.”

“He trained fully today with us, so unless something happens overnight he’s good to go. Dave O’Callaghan is training away with the physios, so hopefully we will see him on Thursday,” Foley said.

“Seán McCarthy picked up a nasty knee injury in the Ulster A game, so his season is probably over, but it wasn’t as bad as first thought. Initial thoughts were medial cruciate kind of area, but it’s a fracture on the top of the bone in the shin. That could be eight to 10 weeks, so not as bad as first feared.

“Mario Sagario should be back with us next week; he picked up a calf injury in the Zebre game but should be back next week. Rory Scannell and Johnny Holland trained fully this week, they didn’t train last week.”

Foley said that his primary aim at this point was getting a win over Connacht on Saturday night but, inevitably, he was quizzed at yesterday’s media briefing in Limerick about the newly created post of director of rugby, and what sort of person he would like to fill it.

“I’d like a fella that has his own opinion, backs his own opinion and listens to others. I think that’s always good. You have to have a challenging environment, you get challenged every week,” he said.

“It’s about not being overly sensitive around it, because everything changes.”

“There is a good element of bite to training at the moment. I will keep that going. It is a time of the year when you can shape your future. It is important that you don’t leave that for others to decide. You grab it, go after it yourself.

“If that is me as a coach, other coaches, I see a lot of good information, a lot of good work ethic around the place, but ultimately you are reliant on the players and making sure they go out in the freshest manner and put in a performance. I thought above in the Aviva it was a game we left behind.”