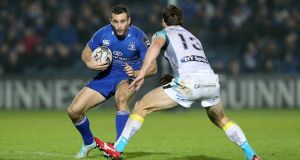 Dave Kearney is back in Leinster line-up after recovering from shoulder injury. Photograph: Ryan Byrne/Inpho

A relatively daunting first outing for Stuart Lancaster in his re-incarnation as a senior coach with the specific remit of overseeing Leinster’s defence in the wake of Kurt McQuilkin’s departure. Glasgow gave the performance of the opening week in the clinical and assured manner they put Connacht to the sword and look as ready for these early-season exchanges as any team in the league.

Furthermore, this will be the Warriors first league game at Scotstoun since their new 4G pitch was installed, a venue where they have been defeated just once in a Pro12 encounter since November 2013, and where Leinster have won only once before.

Granted, Leinster players are reasonably familiar with all-weather tracks and this is still a relatively new venture for Glasgow.

Leo Cullen has made three changes last week’s starting line-up in the win over Treviso. Dave Kearney has completed his recovery from the shoulder injury which ruled him out of the tour to South Africa and will make his first appearance of the campaign, with Fergus McFadden moving over to the right to the exclusion of Zane Kirchner.

This will presumably mean that Garry Ringrose, Irish number 13 in waiting, might not only wear that number again but actually play at outside centre, as opposed to being curiously stationed on the right wing.

Joey Carbery retains the number 10 jersey after his eye-catching, two-try full debut last week. Up front, James Tracy starts at hooker and Jordi Murphy at number eight after appearing off the bench against Treviso.

The fit-again Mick Kearney and props Peter Dooley and Tadhg Furlong are in line for their seasonal re-appearances after being named on the bench. Townsend makes only two changes to his starting line-up, with Fraser Brown replacing Pat MacArthur at hooker, and Sila Puafisi coming in for Zander Fagerson at tighthead prop.

This is also a reprise of the final three seasons ago. With forecast set fair, Glasgow are liable to give the ball plenty of air, and with Leinster also seemingly set on a more progressive and ambitious ball-in-hand game, Sky’s pick of the weekend matches could be an entertaining affair.

It’s just that the Warriors are way further down the track in the running, offloading game which has evolved under Gregor Townsend’s watch, and on the evidence of last week, they also appear to be nearer something resembling optimum strength and performance than a Leinster side still shorn of most of their big guns and still somewhat feeling their way into this season.