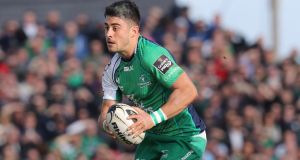 Amid Connacht’s band of brothers, homegrown heroes are essential and no one typifies their rise this season, nor their free brand of rugby, better than Tiernan O’Halloran. Born and reared in Clifden, and having come through the ranks of Garbally College, Galwegians and the Connacht academy, O’Halloran has flourished at fullback with his licence to thrill.

Fully six seasons since his debut as a 19-year-old academy player, it’s hard to credit that O’Halloran is still only 24, having marked his century of competitive appearances three weeks ago with the opening try in the win over Glasgow.

He’s seen, and been an integral part of, their story, and he finds it hard to describe what winning a first major trophy might mean for Connacht when asked to consider the consequences.

“It’s hard to put into words what it would do for this province, because it’s been such an incredible rise this season. You walk through town any day of the week and you’ll see kids in Connacht jerseys all over the place. Five years ago, you might see one every three or four weeks; it would be mainly Gaelic football jerseys.

“So, that’s the way it’s gone. It’ll hopefully encourage younger guys coming up in school and in Gaeltacht areas especially to pick up a rugby ball, as well as a sliotar.

“That’ll just help to grow the province. The future of Connacht rugby is going to get better and better if success breeds success. If we can win this weekend, it can grow more.”

Back in 2009-10 when he made his debut, Connacht finished in 10th and last place, then oscillating between eighth and 10th until last season’s seventh-placed finish.

“Definitely, I’ve experienced some pretty low times here as well; playing in front of just over 1,000 people with a couple of steps out there [onto the pitch] before the Clan Terrace was built. It’s been incredible to see the way it’s grown; not just on the pitch but off it as well with the facilities, the way the crowd has reacted and the whole province has gotten behind us.

“It gives you a good feeling inside. It’s very special. Again, it’s hard to put into words, but it’s been an incredible journey and this weekend is all about those two hours of a game and getting that win. It would be just such a special feeling and for someone like John Muldoon it’s something we would all like to win it for him as well because he deserves it. What he has gone through here, how long he has been here, he epitomises what Connacht is. It would be just brilliant to get that win for Mul and get that trophy.”

In his first year with a development contract, 2011-12, O’Halloran played 21 league games and scored five tries (identical to his figures thus far this season) and, having scored their first try in the Heineken Cup, was an ever-present in their first two campaigns in that competition.

But after a couple of injury-disrupted seasons, like so many of his team-mates, this has assuredly been O’Halloran’s best season. “I think so. It’s just consistency,” he says, citing an injury-free campaign compared to the previous two.

“But the big thing this year as well is just confidence. Pat has been really good with the back three guys. He has given us that licence to just have a go. If we turn over the ball, if we make mistakes, he doesn’t bring us in on a Monday and slate us. He just shows you want you could have done better in that situation.”

Even in his days with the Galway Gaelic football under-16s and minor teams, or the Ireland Schools and under-20s, O’Halloran has never played in a final, while his father Aidan was ruled out of the Offaly team that ended Kerry’s five-in-a-row in 1982 after injuring himself playing football a week beforehand.

“It wasn’t the smartest thing to do,” says O’Halloran with a rueful smile. “I don’t think we’ll be playing any five-a-side this week now; I’d say Pat will be sending Bundee and the likes after us.”

His father, who would become president of the Connacht Branch himself in 2012, was nonetheless fully supportive of O’Halloran’s decision to pursue a rugby career.

“It was a massive decision, especially with my dad’s Gaelic football background. I wanted to play for Galway when I was growing up but I suppose as I started to play more and more rugby from the age of 15/16, and I realised at that stage I had the potential to maybe make it as a pro player.

Or until recently that, one day, he and Connacht could be within a game of being crowned champions of Irish, Welsh, Scottish and Italian rugby.

French let Mohamed Haouas’ talent outweigh lengthy rap sheet 06:30
Centurion Cian Healy still marching to the beat of his own drum 06:00
Nicky English: Limerick nicely primed to pass Premier test 06:00
Pádraic Joyce: ‘It is massively important this All-Ireland final goes ahead’ 06:00
Huge support for former Wallabies player who has come out as gay 06:00
Here is your handy guide to sport on television this week