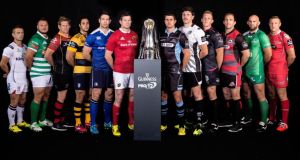 The disappointment of losing last season’s Guinness Pro12 final will be a galvanising force for Munster ahead of the new campaign that begins in a fortnight according to head coach Anthony Foley.

The Irish province lost out to the Glasgow Warriors in Belfast last May and Foley, going into his second season in charge, paid tribute to his Glasgow counterpart Gregor Townsend and his team before outlining a few lessons learned from coming up slightly short.

Foley, speaking at the Pro12 launch in London this morning, admitted: “When you lose a final, you want to taste the other side of it. In Europe, we lost a few before we won a few so hopefully we can get back to the playoffs and knockouts and go from there.

“We, as a group, we know each other a bit better. It was my first year as a head coach and the other coaches know me a bit better now. We went through a lot, we’re a young coaching group and there are new challenges ahead.”

Those experiences will allow them to evolve as a group and refine their approach to the new season. He continued: “We need to keep players fit, to keep our injury list low and having a fluid game-plan that allows you to play with both experienced and inexperienced players.”

Denis Hurley, sporting a medical boot to protect an injury, was representing Munster captain Peter O’Mahony who is currently in Ireland camp, and he spoke about the faith the squad has in their 25-year-old captain and how they will absorb the loss of the Toulon bound Paul O’Connell.

Hurley ventured: “One thing we’ve been lucky with is that Peter O’Mahony is our club captain and he’s only 25. We have a few lads away at the World Cup, but we have the likes of Donncha O’Callaghan who has a lot of experience. Paul (O’Connell) is a big loss, but we have to be selfish in what we’re doing and (concentrate on) what we want to achieve. (We have) a lot of characters who can put us in finals as well.

In terms of the Pro12 he added: “You have to get a good start, you don’t want to be lagging behind. European qualification made things a lot tougher in that top six and if you can take a few wins from that first six games it can stand you in good stead.”