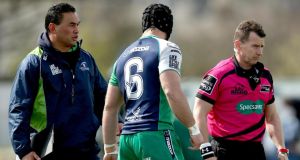 A clinically superior Ulster took the five points on offer; Connacht had to be satisfied with a losing bonus point. And results elsewhere deemed both have kept their respective ambitions alive. Scarlets’ last-gasp win over Zebre keeps the Welsh outfit level on points with Pat Lam’s men, while Munster, although overtaking Ulster, did Connacht the biggest favour with their demolition of Edinburgh.

“That’s the beauty of this competition at the moment,” said Pat Lam, whose side meet pacesetters Glasgow next. “Technically we have the hardest run in,” said Lam, “but it will go down to the wire and it’s exciting for everyone.

“It’s hard to tell how many points we will need, it’s simply to get as many as we can because it could well depend on other results. Look at Zebre, they were 30 seconds away from doing us a favour. All we can control is making sure we come out and try to get the win against Glasgow.”

“Playing at this level helps us get to where Connacht wants to get to. Credit Ulster, there’s real quality across that group and that’s probably these strongest team they have picked throughout the year, and Irish rugby is in great stead when you look at the quality there.”

Down 17-0 at the break, Connacht fought back twice to come within a score, and finished the game threatening the Ulster line.

“At this time last year, we got hammered home and away. We’ve got two points off them this year. The gap is closing and that is reflected on where we sit at the moment.”

Ulster were off the mark with the wind within four minutes when fullback Louis Ludik crossed for the first try. Jared Payne, Craig Gilroy and Tommy Bowe, were instrumental throughout, carving out space on the counterattack, and clinical when profiting from the pack’s hard yards.

Connacht enjoyed their fair share of possession, and the returning Bundi Aki was a livewire throughout and came closest to scoring with a cheeky dive on the ball but was just beaten by Ruan Pienaar.

The home side’s lack of precision proved costly when Ulster grabbed two tries in five minutes. An Aki turnover was quickly fired out to Bowe who delivered in the right corner, before Ulster capitalised on a blockdown with Gilroy benfiting from the overlap. Peinaar converted for a 17-0 lead.

Scruff of the neck

“As coaches, were were a little bit nervous towards the end,” Ulster’s Neil Doak conceded. “We are glad of the five points, we dug in and got the result.”

The return of Iain Henderson gave Doak another big ball carrier, while Chris Henry’s first match after heart surgery was a real boost.

“We need everybody on their feet as its getting close to the end of the season, and we have key games in the next couple of weeks especially against other intepro teams and around the top four or five.

“We always knew we may not be as accurate with boys coming off the Six Nations . . . but it’s good to have the experience of Tommy [Bowe] and the other internationals for the remainder of the games.”

Rory McIlroy battles to stay in the mix as Patrick Reed leads the US Open 00:33
Sergio Agüero could be sidelined for another two months 22:32
Andre Wright steers Bohemians back to winning ways in Sligo 22:17
Brandywell stalemate does nobody any favours 20:50
Weekend Premier League team news 20:24
Here is your handy guide to sport on television this week