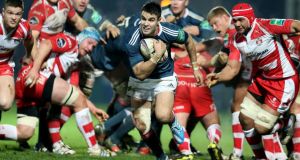 A year on and same time, same place. Munster are again hosts in the penultimate fixtures of the final weekend in the pool stages, albeit in a better position.

Whereas this time last year they had to match Leinster’s bonus point win when hosting Racing Metro at Sunday brunchtime to nail the last runners-up slot, this time they have already secured their regulation place in the last eight, and are aiming for a home quarter-final.

Entering the weekend fifth in the ranking of pool leaders, they’ll be hoping the door to a Thomond Park tie will have been pushed ajar tomorrow; their best hope being that Toulon will have slipped up in Glasgow rather than Toulouse failing to win in Zebre. But if Toulon win, and Toulouse win with a bonus point, Munster will only have Clermont to aim at, and in this they are disadvantaged in that Clermont host a similarly disinterested Racing Metro after the conclusion of tomorrow’s events in Limerick.

As Clermont are a point ahead, and each have the same number of tries (13), Clermont need only to match Munster’s result to stay above them in the rankings and, going into the weekend, that would equate to home advantage in a quarter-final which would be a reprise of last season’s semi-final.

Predictably, Racing have made eight changes from the out-of-form side which lost at home to the Scarlets, this ensures a rare weekend off for Johnny Sexton, Mike Phillips and others though it’s still a side that looks strong on paper but nothing new there.

Timely start
As for Munster, they are inching closer and closer to full-strength, save for long-term casualty Mike Sherry. Rob Penney has made only one change to the starting XV that defeated Gloucester 20-7 at Kingsholm, as Stephen Archer rotates with BJ Botha to earn a timely start ala Martin Moore last night. Simon Zebo is again named on the bench in his second comeback game since cracking a bone in his foot at Murrayfield against tomorrow’s opponents.

The only other alteration sees Paddy Butler named in a Heineken Cup squad for the first time since injuring his thumb, also against the same opposition in October, to the exclusion of CJ Stander.

Edinburgh demonstrated their continuing intent with a deserved win at home to Perpignan last week and Alan Solomons retains an unchanged 23 for this game. Having also won away to Gloucester in this group, Edinburgh currently occupy the third and last qualifying spot for the Amlin Challenge Cup quarter-finals.

Under Solomons, Edinburgh have improved significantly compared to the side eventually beaten 33-0 in this competition here last season, and even the one beaten 34-23 at Musgrave Park in the League on the opening day of this season. Typical of a Solomons side, they have a strong defence, are direct and have a good kick-chase game.

Key to their improvement has been Solomons’ signing of his former back-rower at the Southern Kings, Cornell Du Preez. A potent carrier and highly physical defender, the 22-year-old has made more tackles (71) than any other player in this competition (teammates Roddy Grant and Grant Gilchrist are also in the top ten) along with six turnovers and a couple of tries.

The former Ulster coach will have a good handle on Munster and as Rob Penney’s side discovered in Murrayfield, when the homes side missed just four tackles, they are a tougher nut to crack. Edinburgh have the best tackle success rate (91 per cent) of any side this season.

Patience may be required by home team and crowd alike. A good flow to the game would perhaps suit Munster but there is a chance of rain and Wayne Barnes, with whom Munster have had issues, is the referee.

Potent maul
Yet there has been a much better balance to the Munster game in recent months, with direct carrying from the in-form Peter O’Mahony, David Kilcoyne, Paul O’Connell and Co. Tommy O’Donnell has hit the ground running too and a reprise of their potent maul will be helpful.

Conor Murray he is a hugely important cog in this team while Ian Keatley gave one of his most assured performances last week if overdoing grubbers after the delightful kick which set up Keith Earls, who gives them a real cutting edge.

Edinburgh have lost on their last eight treks to Munster since last winning at this venue in October 2006. Bearing in mind the memory of what happened at Murrayfield in October, Munster ought to have the bit between their teeth.

While this might well be a good deal trickier than the bookies’ odds suggest, with Botha, Donncha O’Callaghan and Simon Zebo to spring from the bench, Munster have the durability to eventually come through.