Lineout battle a fascinating prospect at the Aviva on Saturday 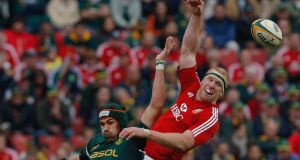 A Heineken Cup final is a tough time to be learning major lessons but that’s how it was for us. People remember the 2002 final against Leicester as the Neil Back game but the far more important thing for Munster afterwards was the hammering we got in the lineout. We had to completely rethink it.

We lost that game 15-9, even though we stopped Leicester’s driving maul which had been the play they’d used to destroy most teams that season. But they stole eight of our lineouts, including one that led to Geordan Murphy’s try.

They had Ben Kay, Martin Johnson and Martin Corry constantly switching and moving up and down the line and we got totally bamboozled. The fact that it sounds so simple now tells you how much the lineout has changed in such a short space of time.

That game certainly changed us. We needed to become far more inventive. Paul O’Connell was still pretty young at the time but by the start of the following season he was taking on a much bigger role in dictating the lineout.

He started to really study it, to try to work out all the moving parts and all the possibilities. There’s no doubt it had a role to play in the development of the world-class lineout operator he is today.

They’re the best at running the operation, they’re the best jumpers and they’re both excellent at disrupting the opposition. Watching them face off against each other on Saturday is nearly worth going to Lansdowne for just by itself.

No area of the game has changed more over the past decade than the level of prep work and detail that goes into lineouts. With Munster, we started coming up with new plays every week. Everybody pitched in, to the point where actually I think we probably had too many voices looking to get too many ideas into the playbook.

There was one time when I wanted us to try a move that put four men in the lineout with me standing at scrumhalf. The lads looked at me like I had two heads. In fairness, I probably should have picked my moment a bit better – we were getting ready to play Gloucester away in the first match of the 2002-03 season so it maybe wasn’t the week to be coming up with anything radical.

Over the years, it became a team thing. Everybody felt they had something to contribute. It wasn’t just a case of Paulie or Mick O’Driscoll calling the shots and everyone falling into line. Everybody was encouraged to come up with ideas and in that way, everybody stayed engaged.

The result was that you threw yourself into your role in each lineout with more enthusiasm. Sometimes, your biggest contribution to a certain call might be nothing more than selling your marker a dummy and making out that this ball is coming your way.

The key for every team is never becoming too predictable. Move your props around, move your jumpers around, shorten and lengthen constantly. Above all, when it comes to execution, keep a clear mind and make your decisions deliberately and without rushing. In the heat of an international Test, it’s a skill in itself to be able to slow everything down to suit your own needs.

The most successful lineouts are the ones with the most options. To get to that point, all your forwards have to get a deep understanding of the lineout, rather than just your hooker and your two locks. If you can extend your lineout so that the opposition is as worried about the fourth jumper as they are about the first, you reduce the amount of attention they can give to each of your players.

As well as that, the further down the lineout you can win ball, the quicker you can get your back-line moving. The scrumhalf doesn’t have as far to go to reach his playmakers if he’s taking the ball from a backrow rather than the guy jumping at two. Speed, precision, unpredictability. Key elements of any good lineout.

O’Connell has always had the natural advantages that a top lineout guy needs – he’s tall, slim and athletic. What he developed over the years was a single-mindedness when it came to the lineout. He was determined to make himself the man, to push out the boundaries of what you could do with a lineout both in attack and defence. It’s got to the point now where his analysis of a lineout is arguably his greatest strength.

Not everybody has that ability to stand in the middle of a pitch and calmly judge what’s needed. You have 50,000 people screaming at you from the stands. You have the opposition screaming at you, at your hooker, at the referee, trying to get you to do everything quicker than you want to. It takes some strength of mind to hold your ground, get your breath, think clearly and calculate what’s the right call.

If the average is around 13 to 15 lineouts a game, you can’t be going in with 10 different lineouts with 10 variations on each of them. That used to happen but one of the main developments over the years has been to slim down the playbook. Sharpen it, refine it. Make sure that everybody knows it inside-out.

Start with the formation. Three-man, four-man, five-man, whatever. Give it a name and then come up with, say, five different calls from that formation. Be ready to move and shift according to the field-position and the scoreline.

With defensive set-ups, there are certain players you can’t ignore. If you’re playing against a really dominant guy like Matfield, then you have to make sure he is taken care of. Whether the ball is going to him or not, you have to keep a strong pod lined up against him at all times.

That’s especially key on days when it’s wet and windy. First off, bad conditions will make teams want to reduce risk so they will want to depend on their go-to guy a lot more. So you have to be on him, to get in there and disrupt as much as possible.

Against someone as good as Matfield, you might only get one or two disruptions a game but that can be enough.

Suddenly, their hooker has to start changing up, throwing a bit longer, going to the tail. Throwing to Matfield is their comfort zone and you have to try and get them out of it. The same obviously goes for teams playing against O’Connell.

Botha is a big, dominant bruiser, a huge man whose best work in the lineout would be going straight up or forward to a ball. He’s very powerful and ideal for the front of the lineout but you wouldn’t get as much out of him in the middle.

Whereas Matfield has that natural athleticism that means he can go in reverse, bend back and catch a ball that has gone behind him. He can walk into a lineout and dominate it, call what the situation needs and execute.

O’Connell fulfils that role for Ireland but I can definitely see Devin Toner taking over from him. Toner has had to adapt a little bit and play that number two role because you can only have one guy calling the shots.

Ideally you’d like to have one bruiser and one athletic guy but Toner has developed so well for Ireland over the past couple of seasons that he’s forced his way in and can’t be ignored.

I would always like a spoiler in there, a real physical guy who can be aggressive in the air, who’s good at pulling down a maul. Toner isn’t really that player – his natural game is as a jumper at four but his height and spring makes him a massive weapon at the front.

There’s almost no such thing as a banker ball at lineout time in international rugby but Devin Toner at two is about as close as you can get. He takes the heat off O’Connell because of that.

It’s all games within games. Two teams trying to bluff each other and outfox each other. A treat for anyone watching on Saturday.