Scotland and Wales in favour of split 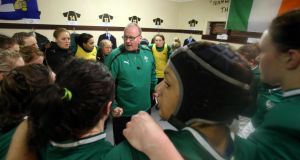 A vote to restructure the women’s Six Nations could occur as early as April 10th, but Ireland’s Grand Slam winning coach Philip Doyle sees it as a regressive move for the 15-a-side game.

The proposed plans to split the championship into separate entities, essentially creating a two-tier tri-nations, would end any chance of another Grand Slam being achieved by any country.

It is believed Scotland and Wales are lobbying for the change, which would put them in the second tier with Italy, while France, England and Ireland would be in tier one, playing each other home and away.

It is unclear whether there will be any promotion or relegation system.

“It would not be ideal,” said Doyle. “For the good of the fifteens game I don’t think the Six Nations should be broken up into two sections. It’s not my decision and I will go along with whatever change, if any, is implemented.”


Short-term benefit
Doyle accepted there was an obvious short-term benefit for Ireland as they would get to play England and France twice next season, ideal preparation ahead of the World Cup in France in 2014.

“Yes, that would mean four quality matches in a World Cup year but I’d prefer to see the traditional structures maintained,” Doyle added.

A competition review is ongoing, with the Six Nations refusing to comment yesterday, but the Wales Rugby Union are believed to see the value of the split from a financial perspective while Scotland are also advocating a departure from the traditional structure.

The decision will ultimately be made by the Six Nations board, potentially at their next meeting on April 10th.

Irish representatives on the board are Pat Whelan and Peter Boyle. It is chaired by England’s Bill Beaumont, with the other members being John Spencer (England), David Pickering and Roger Lewis from Wales, John Jeffrey and Colin Thomson from Scotland and Alfredo Gavazzi and Nino Sacca from Italy.

Before any vote takes place, they will hear from a sub-committee that oversees the women’s Six Nations.


Travel costs
Travel costs of the women’s game were readily embraced by the IRFU this year after the public embarrassment of 2012 when the women’s squad ended up on an overnight train from Paris to Pau, in the south of France, arriving the morning of the game.

After three hours of rest, they lost by a point. This watershed moment ensured an undoubtedly talented group of players, led by Fiona Coghlan, Lynne Cantwell and Joy Neville, got the necessary support to reach their full potential 12 months later.

Coghlan captained them to their first Grand Slam in Parabiago, Italy, on March 17th.

However, as this was happening, moves were afoot to refocus funding and resources to the Sevens game with the stated intention being to qualify for the 2016 Olympic Games in Rio de Janeiro.

On March 18th the union announced funding of €1.1 million per year for the women’s Sevens squad and a talent identification programme that will recruit talented athletes from other sports.

England actively prioritised Sevens this year, pulling many of their top players from the Six Nations squad to compete in an IRB tournament in Houston, Texas, in February, which they duly won.

Ireland have, for this year at least, sought to shift players between both sports. Eight of the Grand Slam-winning squad, including Cantwell, are competing in an IRB Sevens tournament in China. Jeanette Feighery led them to the Bowl title at last week’s Hong Kong Sevens.

Today they face Canada, Australia and Japan at the Guangzhou university town stadium.