Thrilling Six Nations victory will live long in the memory 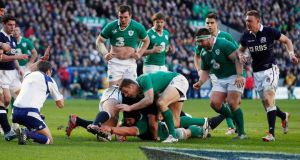 The old championship’s 121st edition will not go down in history as its best, not when so much of the ‘samey’ first four weeks was so forgettable. But it sure as hell provided its best ever climax and, most likely, simply its day of days.

To complete an idyllic weekend, the Irish Women’s team regained their Six Nations crown with a 73-3 win over Scotland yesterday, but you couldn’t have scripted Saturday’s events. With Ireland’s 40-10 win over Scotland eclipsing Welsh efforts in Rome and setting England a target of beating France by 26 points or more, “allez les bleus” duly echoed around Murrayfield, and heaven knows how many bars elsewhere, as Irish supporters roared on Philippe Saint-André’s side.

An estimated 10,000-plus Irish supporters watched on various screens around Murrayfield as darkness gradually descended – living and dying with every torturous twist and turn from Twickenham as England eventually won 55-35 and fell one converted try short of snatching the trophy.

“I thought the game had finished,” said Schmidt, “and then I looked up and thought ‘that’s not good’.”

It was a fittingly madcap end to a madcap game, asRory Kockott finally kicked the ball dead.

“You forgot that they weren’t playing for us, they were looking for a try,” said Paul O’Connell with a rueful smile in what he described as “the most strange, bizarre way to win a trophy”.

When Ireland were awarded the trophy on the pitch, it was a cue for U2’s A Beautiful Day, the Irish Rover and, rather more curiously, Living on a Prayer. In fairness to the Scots, they threw us quite a party.

Reflecting on Twickenham, Schmidt said: “Coming into it, I thought: ‘yeah, we’ve set them a pretty tough target but they’re capable’. They go 7-0 up after about four minutes and you go ‘aw, that’s not what we’re looking for’. France bounced back and took the lead and we got excited about that and I don’t want to go through it score-by-score – I didn’t actually see them all thankfully, it would have been close to the death of me.”

So, who says the Six Nations can’t do tries and running rugby? The sun shone brilliantly across the tournament, from Rome to Edinburgh to London, and it rained tries; 27 of them in all, as compared to just 33 over the previous four rounds.

Three teams with big winning margins to chase were liberated by the unique circumstance of the day. Even the three teams – Italy, Scotland and France – with nothing tangible to play joined in the party. To be honest, the argument for having scattered kick-offs was strengthened. It wouldn’t have been the same had the games kicked off simultaneously.

With Wales setting the tone, Ireland following, and France deciding they’d have some fun at England’s expense too, the three games yielded a faintly astonishing 211 points. And yet on a day when there were so many potentially defining moments – Leonardo Sarto’s breakaway converted try for Italy with the last play of the game in the Stadio Olimpico, Noa Nakaitaci adjudged to have touched down a milli-second before his left foot touched the grass behind the dead-ball line – it was arguably the saving of a try by Jamie Heaslip which was the day’s defining moment.

It came in the 76th minute, Stuart Hogg stepping inside Tommy Bowe and over the line, only for Heaslip’s tackle to slip the ball from the Scottish fullback’s hand just before he touched down. Had Heaslip not kept working and chasing, a converted Hogg try would have left England with the target of a 19-point win rather 26.

It felt big at the time and it was a fitting testimony to the sheer honesty of effort of this team. “As much as anything it’s grit and character and determination,” said Schmidt. “Jamie can make those tackles without a doubt but he could have just given up a little bit there particularly in the context [of the game]. We had a good lead but we knew that every point would be precious and his determination managed to give us a level of comfort.”

As Vern Cotter said afterwards: “Every action in the game is a moment of truth.” The Scottish coach was lamenting his own team’s errors but his words could never have been truer. To put Ireland’s 40-10 win in perspective, Schmidt reminded us that Scotland had lost their first three games by a score and had led 13-10 a week previously.

Expectations for the World Cup will hardly diminish now. Forecasting that England will draw more resolve from another near miss, Schmidt spoke of continuing to “stay a little bit under the radar”.

“We’re going to try because I just think it’s going to be an incredibly tough tournament. We’ve never made a semi and everybody knows that that’s where we’ve got to try to get to. That’s what we’ll work toward and probably the low-key approach, if we can take that into that challenge it would be great because I think you can get distracted and that’s always a risk.”

Then three in a row? “I just need to find a beverage. Can I say that?” said Schmidt.