The rise and rise of Handre Pollard

Gifted young Springbok outhalf has the world at his feet 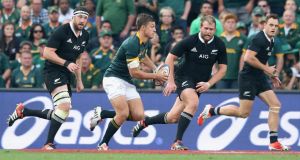 It’s just as well that Handre Pollard has broad shoulders on his six foot three inch frame as the expectation surrounding the 20-year-old South African outhalf would be a cumbersome burden for the less mentally strong. His accession to the senior test match arena has been touted long before he took his first steps against Scotland in June.

Talent has expedited his progress from a young age, moving from the South African schoolboy side to the squad that hosted the IRB Under-20 World Championship in 2012. Despite being just 18-years-old and missing the opening match against Ireland, Pollard established himself as the country’s first choice outhalf for the remainder of the tournament.

He scored 42 points in helping the host nation to a place in the final, a tally that included 15 points (four penalties and a drop goal) in a 22-16 victory over the defending champions New Zealand in the decider. The following year he moved to inside centre as the junior Springboks tried to defend their title in France, a campaign that came unstuck in an 18-17 defeat to Wales in the semi-final.

Pollard was selected to go to a third IRB Under-20 World Championship that took place in New Zealand, this time as the South African captain. Sandwiched in between victories over Scotland and Samoa, the junior Springboks beat the baby Blacks 33-24 and Pollard chipped in with a try, three penalties and two conversions.

The manner in which the draw panned out saw him face New Zealand again in the semi-final and he again crossed the New Zealand line in a 32-25 win, adding three conversions and two penalties. At one point he held the all-time scoring record for the tournament before Argentine Patricio Fernandez edged past his 131 points.

He was again included on a shortlist for Under-20 World Player of the Year, one that included Ireland’s Garry Ringrose, and this time took the accolade. He went straight from the age-grade tournament into the senior Springbok squad following injuries to Patrick Lambie and Johan Goosen and Morne Steyn’s unavailability.

He made his debut against Scotland at Port Elizabeth in June of this year, kicking five conversions and a penalty, before starting five of South Africa’s six matches - Steyn came in for the game against Australia in Perth - in the Rugby Championship.

He copper fastened his burgeoning reputation with two tries in the final match to help his side to a 27-25 victory over New Zealand. Pollard scored 19 points in his 62 minutes on the pitch, watching his replacement Pat Lambie kick a contentious penalty from long range to win the match.

The young pivot has certainly justified the faith of Springbok coach Heyneke Mayer in promoting him to the starting role. Pollard has excellent passing and running skills while his physique allows him to be proactive in the tackle and the manner in which he defends his channel.

One area where experience will allow him to develop further is his game management, primarily the ability to manoeuvre his side down the touchlines. On the evidence of his six caps to date there’s much to admire; the key is to maintain that high bar and continue to evolve as a player. He’s certainly demonstrated the aptitude to meet those criteria so far.