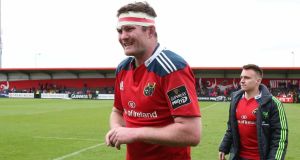 Munster’s Donnacha Ryan: with the World Cup looming the secondrow could benefit from playing for Emerging Ireland at the Tbilisi Cup in June. Photograph: Inbpho

World Cup looms ever closer representative playing outlets become a cherished commodity for those looking to impress Ireland coach Joe Schmidt before this season peters out.

One such opportunity could come in the form of the Tbilisi Cup. The IRFU is sending an Emerging Ireland team to a tournament where they will be joined by hosts Georgia, Uruguay and Emerging Italy.

Emerging Ireland took part in this competition in 2013 – they finished second to the Emerging Springboks – before turning their attentions to the IRB Nations Cup in Romania last year, a tournament they won under the coaching baton of Dan McFarland (Connacht) and Neil Doak (Ulster).

The tournament takes place from June 13th-21st and would offer an opportunity for players whose season has been curtailed by injury or those returning from an extended spell on the sidelines. Two Munster secondrows Donnacha Ryan and Dave Foley and Connacht tighthead Nathan White spring to mindGeorgia and Uruguay have both qualified for the World Cup later this year.

It seems plausible for Schmidt to have a look at a number of players in the context of World Cup selection while drawing from some of the best age-grade players of the last three or four years, a group that would include Jack O’Donoghue (Munster), Jack Conan (Leinster), Stuart McCloskey (Ulster) and Matt Healy (Connacht).

Leinster’s Girvan Dempsey would seem a logical choice for coach given he led the province to a couple of British & Irish Cup Cups in the last three seasons.

Ireland play the Barbarians on Thursday, May 28th at Thomond Park, two days before the Guinness Pro12 final at the Kingspan Stadium.

Meanwhile Nigel Carolan has announced a 28-man Ireland squad for the IRB Under-20 World Championship in Italy from June 2nd-22nd.

The Irish side started the Under-20 Six Nations with wins over Italy and France but three successive losses made for a disappointing tournament. In preparation for this announcement, Carolan and his coaching team invited a “best of the rest” selection to take on the Ireland squad.

Sean McNulty missed the Six Nations through injury but is expected to prove his fitness over the next couple of weeks while Old Belvedere scrumhalf Charlie Rock is the only uncapped player in the squad.

Ireland will play a warm-up game away to France on Friday, May 22nd.