Survival of the fittest as Romania face group’s top two

While Japan overcame South Africa, weaker teams are constantly at a disadvantage 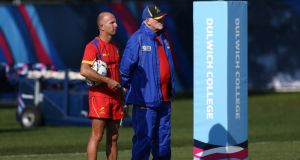 Romania’s Welsh head coach Lynn Howells at a training session in London: “We have to hope our players weather France and are still standing for Ireland.” Photograph: Justin Tallis/AFP/Getty Images

Fuimaono-Sapolu was referring to the world of Romanian, Samoan, Japanese – and we know how that ended – and Namibian rugby, tier two teams facing better resourced and better prepared fully professional sides back to back.

This week Romania play France on Wednesday and Ireland four days later in what will be the toughest four days of their rugby lives. It is as much a survival test for Romania.

“No, I have never done it before,” says Castres prop Lazar Mihaita. “In the last World Cup we played England and four days after that Georgia. I didn’t play in the England match so I don’t know what it is like to play two games in four days. I can imagine it could be tough.”

Their hotel is on Rochester Row, Westminster. A grand- sounding location, it sits alongside England’s luxurious base in Pennyhill Park, Surrey and Ireland’s at Celtic Manor in Wales on the list of selected World Cup team hotels.

But Romania’s hotel is closer to the Pimlico Tube stop than the one opposite the Palace of Westminster. It was their choice of hotel, say the organisers, who pay for the accommodation costs of Romania as they do for all countries. If two teams opt for the same hotel, the higher-ranked team has first choice.

It’s here where Romania will have to work out how to weather the physical toll of playing two top six teams back to back. Two-thirds of their squad earn less than €30,000 a year playing professionally in Romania. Ten of the 31-man squad play in France or the UK.

To compound matters Romania produce more forwards than backs with Welsh coach Lynn Howells praying that a backline player doesn’t get injured before Romania meets Ireland in Wembley on Sunday.

“I can understand,” says Howells of the Samoan sentiment. “But all the tier one nations have the same problem. The plus for them is their depth. World rugby has actually been very good to us. But we don’t have the resources of those tier one nations in terms of playing ability or depth.”

Joe Schmidt opened the Irish account with 47 players on his squad but left out others capable of playing to international standard in London. Romania’s pool of credible players was just three more than they eventually brought.

“If I’m perfectly honest, we have 34 players,” says Howells, who was assistant to Welsh coach Graham Henry in the 1999 World Cup and caretaker coach for the 2001 Welsh tour to Japan. “We have to hope our players weather France and are still standing for Ireland. The biggest thing is if we can get through the two games. If our backs start falling down, we have big problems.

“The majority of our players are in the forwards. They are not spread equally. It would be about two to one forwards to backs.”

Romania has a professional league but just six clubs compete. If players are good enough, they move to other European clubs as Mahaita did.

There is also the human issue of Romania being aware of the salaries Dan Carter (€1.5 million a year), Richie McCaw and Johnny Sexton attract. Again, they are trying to be equals in an unequal rugby world.

“In Romania the players are employed to play rugby and trained to play rugby throughout the week. Whether it’s professional when you consider the Irish, French and Welsh . . . they are way below,” says Howells. “It’s not even comparable. I would say the top player in Romania would be on . . . if he is earning €30,000 a year, if, that would be a good salary.

“The good thing against France is that we have seven forwards that play in France so they know the players. But the rest of the players won’t know the Irish players like that. For them to go on the field and play against players like O’Connell, if he plays, will be huge.”

Japan have galvanised the minnows. But also, says Howells, the bigger teams who may now even sense danger from three-star hotels in Pimlico.