Several players unable to train ahead of Canada match, but Peter O’Mahony expects to feature 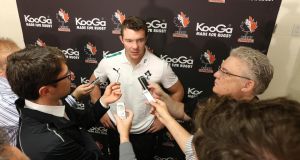 Ireland team doctor Jim McShane has his work cut out this week as a stomach bug has spread throughout the squad in Toronto.

While not quite on the epidemic scale visited upon the poisoned All Blacks before the 1995 world cup final against the Springboks, it is considered serious enough for at least four players to be put in isolation at the Sheraton Hotel base camp.

Several players cannot train until tomorrow, and while those suffering with illness are expected to recover by Saturday, interim head coach Les Kiss confirmed it is influencing selection plans ahead of the Test match against Canada at BMO Field.

“We’re in a situation where we will not have a full squad training (today) as there is unwellness in the squad,” said Kiss. “We just got to deal with it. These stomach upsets do happen when you travel.”

Peter O’Mahony stated he is available for selection, despite an elbow injury, while Fergus McFadden (neck,head), Robbie Henshaw (shoulder) and Chris Henry (gash over eye) are on the mend.

Kiss did state, however, that despite the illness there will be no additions to the remaining 28-man squad, even after Simon Zebo was called up by the British and Irish Lions.

Over 90 Irish contracted players are currently on tour, with 11 selected by the Lions, the Emerging Ireland squad in Georgia, the under-20s at the Junior World cup in France and this tour.

Canada have their own problems with Matt Evans, Sean Duke and Jebb Sinclair yet to pass the IRB concussion protocols after the attritional victory over Tonga last weekend.