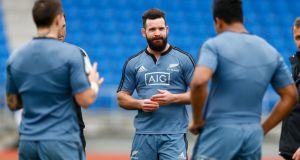 Ryan Crotty: will make his first Test start for New Zealand at inside centre in place of the injured Ma’a Nonu. Photograph: Phil Walter/Getty

New Zealand’s hopes of a world record dissolved in the Sydney rain last week but retaining the Bledisloe Cup remains a major motivating factor for the All Blacks ahead of the return match against Australia on Saturday.

Lose their second Rugby Championship encounter at their Eden Park fortress and the Wallabies will only need to draw in the third Bledisloe Test in October to regain the symbol of trans-Tasman superiority, which they have not held since 2003.

Win, and the cup returns to the New Zealand Rugby Union headquarters to a trophy cabinet that has lost the women’s World Cup and Commonwealth Games men’s Sevens titles taken in the last month.

Steve Hansen, however, has told his players they are in danger of losing it if they did not improve on their performance from last Saturday’s 12-12 draw.

“We didn’t play well enough,” said Hansen yesterday. “So we have to be honest about that and if we want to retain the Bledisloe Cup we have to go up 10 or 12 notches and get into it.

“We have had an honest review . . when we don’t play well people put their hands up and go about working on it and improving and we expect that to happen in the weekend.”

The All Blacks were under intense pressure for much of last week’s game, made too many errors in execution and lacked the intensity required to subdue an improving Wallabies pack.

Hansen has rarely responded to lacklustre performances with wholesale changes, often challenging his players to rectify their errors the following week.

As such, his changes for Saturday’s match have principally been injury-enforced.

Ryan Crotty will make his first Test start at inside centre in place of the injured Ma’a Nonu, while Conrad Smith returns at outside centre.

Wallabies coach Ewen McKenzie also resisted the urge to tinker with his side, retaining the same 23-man squad from last week.

His gamble to give Kurtley Beale the starting flyhalf role did not quite pay the dividends he had hoped but it did not fail and the New South Wales Waratahs’ utility man will be keen to stamp his mark on the game in better conditions.