Six Nations: Origin of 51 per cent of World Cup 2015 tries proved to be lineout possession 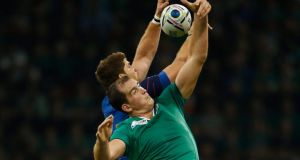 Ireland’s Six Nations will be fascinating to lineout nerds. No Paul O’Connell in the Irish set-up; more pressure on Devin Toner to run the show. And no Peter O’Mahony, a man who helps Ireland defy the usual conventions of lineout maths.

It’s not so very long since the rugby lineout was a scrappy affair. A one-handed throw, more shot-putt than quarterback, heaved into a sea of flailing arms. A nice tight spiral into the hands of a perfectly timed jumper can look deceptively smooth and simple. But to make that happen there’s a lot going on.

One of the few bright spots in Ireland’s 2015 World Cup campaign was their gleaming 98 per cent lineout percentage. Nice stat, but a blunt instrument. “When you look at the stats, they always give you lineout won or lost but they don’t tell you whether the throw is on target or not” said Simon Hardy, specialist throwing coach with England’s RFU.

A hooker might miss low and get away with it, then fire a beautifully flighted dart only for it to be beautifully thieved by the opposition. Hardy makes sure his hookers know the truth of the matter, recording an “on target percentage”, a “lineout won percentage”, and a “quality possession percentage”.

That last one? That’s the whole ballgame. You want it, and you want to stop your opponent getting it.

“You become a much better thrower the closer you get to finishing the game because, while you obviously practice, your belief in the mental part of it becomes much stronger” said Gavin Hickie, former Leinster and Leicester hooker now coaching in the US. The hooker will have a routine, like a golfer or place kicker. A word or action to kick-start a mechanism.

Visualise the possible throws: two options, culled to one by the lineout leader when they take formation. And check-out calls; emergency throws open to an experienced hooker who doesn’t like how the defence is lining up.

Making those initial lineout calls is a job in itself, one traditionally guarded by the secondrow union. Age is no barrier for the right candidate. Ross Molony called the lineout for Leinster in their home win against Bath in the Champions Cup. Just 21, he’s done the job rising through the ranks.

Devin Toner called the lineout on his Test debut. Former Ireland lock Trevor Hogan said he rarely called lineouts, realising later in his career the importance of having that skill.

“If you want to be a starting secondrow, someone that’s really valued, you have to be the guy who calls the lineouts. It requires a confidence. A brain. It’s such a pressure, something people on the outside probably don’t realise. Every part of the field you have to be aware of what lineout would work here, what our defence would be in this certain area. What do our backs need off this? Add it all on to your own performance where you’re worrying about rucks, you’re worrying about carries, and defensively where you need to be in the pattern.”

The lineout does not live on guile alone.

“Your lineout is only as strong as your weakest link. The most important element is that everyone knows their role inside out” said Leo Cullen, a man of considerable reputation in this field. The lifter, for example. An unglamorous role but crucial to the height and stability of the jumper as well as ensuring a safe landing. All that while bracing for opposition impact and trying to block the opposition from getting through to the scrumhalf.

A good lineout result will be quality possession. To achieve this, keep things simple until they figure out how to stop you. Then, use movement. Deception. Approach the line in a bunch only to spread out, perhaps. Change the timing. Change the numbers. Or, clean catch made, hold the jumper up that half second longer to draw the penalty as the defence rushes in underneath. Keep them honest.

On the defensive side, are they jumping in certain zones or mirroring their direct opponent, reacting to their moves? Or maybe they’re taking the line before darting elsewhere – triggered by the thrower’s cue for starting their motion (“every hooker has a tell” said one lineout coach) – shifting position at the last second to get inside the hooker’s head.

Perhaps they won’t contest in the air at all, waiting instead until the jumper lands. It’s a decision every team will make depending on field position and the opposition’s strengths. Getting up in the air can be a risk, tying up men who might be better used getting underneath a maul, splintering it.

“People imagine lineouts are contested on most occasions” said World Rugby’s Mark Harrington. “However this is not true. One feature of a good lineout is the lack of contest, ie the lineout is too good to be contested.”

New Zealand contested most Rugby World Cup throws – 75 per cent. Canada and Uruguay were at the other end of the scale; just 10 per cent and 7 per cent respectively. A strategic choice but it would be rare to give up the skies completely.

“You wouldn’t like to just concede every lineout in the air” said Hogan. “It’s something you pride yourself on as a secondrow; as a lineout jumper.”

Ireland contested 67 per cent of opposition World Cup lineouts, second to the All Blacks. Of course it helped to have aerial operators of the calibre of O’Connell and Toner. And the vital role of Peter O’Mahony.

The maths of a full lineout mean you can only have two clear pods. With front, middle and back to cover “that means one other part will be open” said Hogan. “So then it’s like a chess game to find where is open, or to double-bluff.” Or cheat the system. A floater, perhaps, or the single lift, seen in Sevens.

“The single lift is a difficult skill,” said Nathan Hines.

“At Clermont we used Julian Bonnaire as a single lift sometimes as he was quite light and had good balance.” Useful on attack and disruptive on defence. “Peter O’Mahony in the World Cup, he was often a single lift” said Hogan, enabling Ireland to potentially cover that third space and expand their own attacking options. The Irish lineout was contested in the air just 21per cent of the time at the World Cup.

True lineout nerds consider all this a fascinating game. To spend hours poring over game tape, picking up opposition lineout patterns and player behaviours, you’d have to love it. Truly. Deeply. It’s a lot of time to spend on something you might do just 13 times a match, but with scrums often ending without the ball in play the lineout is a vital part of the attack. The origin of 51 per cent of Rugby World Cup 2015 tries? Lineout possession.

Are there professional players blind to the lineout’s intrigue? There are some, said Hines. Backs, mostly. “They’d have no idea what goes on in the lineout” said the retired lock, drily. “As long as you give them the ball, they don’t care.”

1 Gerry Thornley: After 32 weeks the Six Nations is back up for grabs
2 Extremes of sweet and sour for Solskjaer as Man United show signs of revival
3 Bennett girding his loins for impossibly unpredictable Vuelta
4 Stockdale and Ringrose on board with expansive Irish game plan
5 Arsène Wenger: Arsenal was a matter of life and death to me
Real news has value SUBSCRIBE