Head coach Joe Schmidt and outhalf Johnny Sexton speak to the media ahead of Ireland’s trip to Paris to face France in the Six Nations. Video: David Dunne 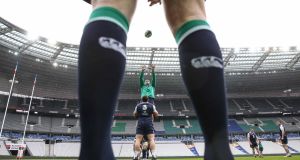 This will not exactly be Paris in springtime. The forecast is for a cold, windy and very wet day; more Irish-type conditions than French, and more likely to make it a set-piece, mauling, close-in slugfest than either team would perhaps prefer.

An understandably chill blast of security will also be in evidence, with supporters advised to arrive early and travel light. The gates will open two hours before kick-off and there will be an extra cordon of security about 500 metres from the ground, as well as at the entrance to the stadium.

Security has been increased threefold in numbers and fans will be searched on both occasions. What’s more, the nearer to kick-off, the more security will become vigilant. Last week’s game against Italy was seamless enough, but that was for an attendance of 66,000. This game is a 79,000 sell-out.

Ireland are seeking to beat France for a fourth time in succession, something which has not happened since the six-in-a-row of the 1920s, and thus extending their unbeaten run against les Bleus. Yet, still and all, this is Paris, where Ireland have won twice in 44 years, or three times in 64.

France have picked a huge pack, while keeping, in Eddy Ben Arous and Rabah Slimani, what appears to be a stronger-looking scrum in reserve .

Ireland solved their scrum problems last week, albeit after effectively suffering a seven-pointer, and could be presented with a different set of problems this week, in this area and more besides

If the French scrum gains an ascendancy, we all know the psychological impact this could have on the Stade de France crowd and the game. Guy Novés and his staff have been working all week on generating and maintaining a higher tempo this week, which may be harder to achieve given the forecast.

Nonetheless, this looks to be an altogether more dangerous French side than the one carved by Philippe Saint-André. Two of three players effectively blacklisted by the latter and Patrice Lagisquet, Maxime Mermoz and Teddy Thomas, have been recalled for this game, with a third, Francois Trinh-Duc, set to follow when he has accumulated more game time after recovering from a broken tibula.

Thomas scored four tries in three games in the November 2014 window, but after turning up late for a meeting during the 2015 Six Nations, was dropped and cold-shouldered.

“I don’t want to talk about what happened before,” said Novés, “but everyone in their lives has been late once or twice.”

The players are, reportedly, altogether happier, and Noves’s achievements in the game not only commands respect, but his approach will liberate them on as well as off the pitch. They fashioned three good tries last week, including one from a tap penalty.

Even so, the World Cup showed he is working off a poor base. Ireland may still look a tad under-powered in the tight five, but are more assured and talented in the middle five.

The return of Sean O’Brien alongside CJ Stander and Jamie Heaslip gives them plenty of ballast in the backrow, and the Conor Murray-Jonathan Sexton half-back partnership should provide more control.

The six-day turnaround is problematic. Since 2012, teams have had to endure this handicap on 13 occasions in the Six Nations. It is not an exact science, and there are other variables, but teams so disadvantaged have had five wins, one draw and seven defeats. It can be overcome.

Noting that a national squad set-up has “the best of the best”, from players to back-up staff, Rory Best yesterday reasoned: “Look, if the game loosens up a bit, the way we look at it is that it’s just a bigger challenge for our defence. We know how to go about attacking, we have some really, really cool, calm and collected guys who run our plays and they know how we want to play, so when the ball comes our way we’ll know when it’s on to play and when it’s on to find territory. Defensively, we’re going to be tested. It’s a massive challenge and one that we will look to raise our game to.”

A couple of other factors encourage Irish optimism. They profited from a willingness to run the ball wide off turnovers here two seasons ago, for the second of Johnny Sexton’s tries; looked alert to the possibilities of transferring from defence to attack last week; and, judging by their work-rate off the ball and sloppiness in re-aligning defensively last week, this French team look even more vulnerable than two years ago.

What’s more, if they don’t gain an early ascendancy, on the pitch and the scoreboard, then as ever the bourgeoise Stade de France factor could work against them, as will their own lack of experience and achievements to date.

Jules Plisson will presumably take over the kicking duties given his match-winning performance off the ‘t’ last week, but including Sébastien Bézy and the two scrumhalves curiously covering half-back on the bench, Maxime Machenaud and Jean-Marc Doussain, none of the quartet are first-choice goal-kickers for their clubs.

In this, Ireland could hold a distinct advantage, not only in Sexton but in Ian Madigan as well.

Sure, Sexton had a couple of misses nearing half-time here two years ago, but held his nerve in the second-half to augment two tries, and ultimately it was a miss by Doussain from 25 metres which went some way toward Ireland winning and securing the title.

For Ireland to retain hopes of completing an historic hat-trick of titles, victory is probably imperative after last week’s draw. The bookies can’t split the sides, making it a scratch game. What odds a second draw in consecutive weeks, and a third in six meetings?

Yet they have enough about them, especially in the middle five, to make one believe that the six-day turnaround and the weight of history can be overcome, and thus keep alive hopes of a shot at making their own history.