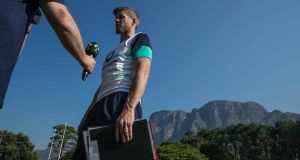 The list of absentees which was compounded by last week’s quadruple whammy to four established Leinster and Irish backs at the end of a World Cup season suggests a pretty daunting assignment for a somewhat refurbished Ireland squad. But along with a sense of historic opportunity Simon Easterby sees this tour as an eye-opener for the coaching staff and an opportunity to start building for the 2019 World Cup in Japan.

Noting “a real collective drive” within the squad, the Irish forwards coach added: “Those guys who have stepped out, yes that’s a blow, but those guys have stepped in see that as an opportunity. You’ve got different players coming in and they’ve all got different qualities to the ones who have left.”

“We’ll find out a lot about them. We’ll find out over the next three weeks can those players come with us for the next couple of years building towards Japan in 2019 and maybe without a couple of those injuries to more established players we wouldn’t see that . . .”

This week was “not even close” to the disruptive build-up to the World Cup quarter-final, Easterby maintained, when also hinting that perhaps they had allowed those disruptions – notably the protracted confirmation of Paul O’Connell’s farewell – to be too much of a distraction.

Drawing on his own “limited experience” of playing here – Easterby played in Ireland’s last tour here in 2004 when they lost the second Test in Newlands 26-17 – he added: “The players will find out, certainly when they arrive in Newlands, what it means. It’s a great place to not only go and watch a match but to play in. It’s incredible.”

“The whole country will get behind the Springboks as well. They’ve got a new head coach and with that comes a lot of expectation probably from the people but an excitement as well . . .”

“The players understand it’s going to be different to what we’ve been used to. The Six Nations is an incredible tournament with a lot of parochial rivalry but down here we’re coming into their backyard and we’re a long way from home.”

“We want to come here and lay down a marker and make a statement over the next three weeks. I’m sure individuals will want to do that, those that get selected for the first Test and the squad as a whole want to leave here feeling like we’ve achieved something.”

Easterby’s first game as Ireland’s forwards coach also occurred when the sides last met, at the Aviva Stadium in November 2014, their fourth win in the six meetings in Dublin since Ireland last toured here.

“It’s important we beat a team away from home, a Southern Hemisphere side away from home,” said Easterby. “If we want to do better than get to the quarter-final of the next World Cup then we’re going to have to do that. So we need to start to build that now, not in three years’ time.

That 2014 win in Dublin left an indelible mark on the Springboks’ psyche, when despite the loss of Chris Henry on the morning of the game, Rhys Ruddock stepped in at openside and scored off a clever lineout maul. The Irish pack generally stifled the Boks’ maul, albeit they also scored one of their two tries off a lineout maul.

Right on the edge

As well as Paddy Jackson starting at outhalf, Ireland may have to reshuffle their midfield in order to move either Robbie Henshaw or Jared Payne to fullback, with Iain Henderson’s return giving them five options in the secondrow.

A change in the laws regarding the maul, which was introduced for the Super Rugby campaign, means teams will no longer be able to shift the initial ball carrier to the back of the maul as this will be interpreted as obstruction. Instead, the first receiver will have to pass the ball to his team-mates who can then shift the ball to the back.

“We haven’t played under those rules as yet but it’s something that we’re fully aware of and it’s a slight change, it’s a not a huge change,” said Easterby.