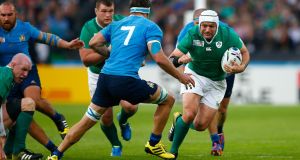 Rory Best runs at Simone Favaro of Italy during the 2015 Rugby World Cup. “To now captain Ireland going into the Six Nations is a massive thing for me and my family.” Photograph: Shaun Botterill/Getty Images

Spare a thought for Rory Best. There is probably no harder task than to succeed Paul O’Connell as captain, who had effectively succeeded Brian O’Driscoll, the two iconic figures of Irish rugby in the professional age who both also captained the Lions. Follow that.

For every Six Nations since 2004, one or other has been Ireland captain save for the 2013 campaign, when Declan Kidney surprisingly opted for Jamie Heaslip despite the return from injury of O’Driscoll. Ireland won one match and finished fifth in an injury-ravaged campaign.

In all, O’Driscoll was captain for Ireland’s three Triple Crowns from 2004 to ’07 and the 2009 Grand Slam, with O’Connell captain for the last two Six Nations title successes; a remarkable return from 11 campaigns with one or other as captain.

“He (Schmidt) phoned me up and said the coaching staff had a meeting and discussed a few things, and if I would accept it they’d love me to be captain,” said Best on RTÉ Radio yesterday. “I was trying to play it cool but sort of said it would be an honour to captain the side. Probably inside I was a lot more excited than I let on to him.”

The 33-year-old is the most experienced member of the 35-man squad announced by Joe Schmidt and has captained Ireland four times in his 89-match Test career.

The first two occasions came in the 2009 summer tour of North America under Declan Kidney and the latter two when O’Connell was sidelined for the final two rounds of the 2012 Six Nations. Best led Ireland to a home win over Scotland before suffering a 30-9 defeat against England in Twickenham.

On succeeding O’Connell, Best said: “Obviously it’s a challenge. Both him and Brian were fantastic captains for Ireland and they very much led by example. They spoke and they spoke well and people listened . . .

“They were their own person, their own man, and they led the way, they led for their provinces and probably for every other club that they played for leading to that point. And I think that’s something that I really will take from them is that ultimately you lead by what you do and for me it’s a big challenge . . .”

Of the nine players from the World Cup squad who missed out, most have been victims of injury more than form, namely Cian Healy, Mike Ross, Peter O’Mahony, Iain Henderson, Chris Henry, Darren Cave and Tommy Bowe, as well as the retired O’Connell, although Jordi Murphy’s exclusion is purely an issue of form.

“There are a few new faces but at the same time we have resisted the temptation to include some of the very promising youngsters, allowing them a bit more time to develop as well as the opportunity of further game time with their provinces,” added Schmidt, no doubt with Ringrose in mind.

The absence of Healy and Ross means Ireland will have to start their attempt at an historic third title in succession without their first-choice props of the 2014 campaign. Ross was also an ever-present last season, when Healy started one game and was a replacement in three more. Given O’Connell’s departure as well, the tight five does look comparatively under-powered.

The net effect is likely to see Jack McGrath, who started four of last season’s games, wear the No 1 shirt, with James Cronin as back-up and Marty Moore and Nathan White vying for the tight-head slot.

The selection of the fit-again Robbie Henshaw and Jared Payne, suggests the starting team to face Wales will have a familiar look to it, with Mike McCarthy and Rhys Ruddock favourites to replace O’Connell and O’Mahony.

The question marks regarding the selection on the wings, and back-up in the back-row, as well as outhalf cover, remain to be resolved. Leinster are again bulk suppliers with 17 players, followed by Munster and Ulster with seven apiece and Connacht with four.