New centre partnership of Henshaw and Payne on the cards

With Best injured, McGrath and Cronin are likely to join Ross in the Ireland frontrow 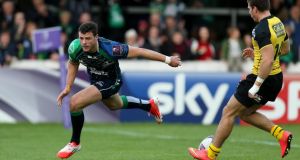 At lunchtime today Joe Schmidt will confirm the selection of a brand new three-quarter line compared to last season’s Six Nations, comprising Rob Henshaw as a converted inside centre alongside the newly qualified Jared Payne, with Simon Zebo and Tommy Bowe on the wings.

The only other changes from the starting XV in Paris for the Six Nations, title-winning finale last March will see Jack McGrath and Seán Cronin come into the frontrow, after Rory Best’s calf strain yesterday ruled him out of contention along with Cian Healy as well as 15 other internationals.

It appears a particularly tough ask on the 21-year-old Henshaw in only his second test start, given he has played most of his rugby at outside centre or alternatively at full-back. There was a clue perhaps though, in Henshaw playing at inside centre for Connacht away to Exeter Chiefs two weeks ago in the European Challenge Cup despite originally having been selected at his more familiar outside centre. If not at the Irish management’s behest, it must surely have been the result of at least a polite request.

Payne has also had more joy when reverting to full-back for Ulster this season, but clearly Schmidt also wants to look at his midfield options for the World Cup in addition to one containing D’Arcy.

While Cronin’s promotion arguably fills some of the ball-carrying void left by the absence of Healy and Seán O’Brien, the ripple effect of Best becoming the third hooker to be sidelined is that Richardt Strauss will join Rodney Ah You on the bench.

It is expected that the in- form Ian Madigan, who steered Ireland home from a perilous position in the second test in Tucuman, has been chosen ahead of Ian Keatley for his versatility and goal-kicking, not to mention proven X factor off the bench. The selection of Jones ahead of Gilroy suggests there remains some concern about the back problem which has prevented Rob Kearney from playing for four weeks.

Compared to that second test in Tucuman, there are seven changes. Henshaw and Bowe return from injury alongside Payne, as does Conor Murray, Peter O’Mahony and Cronin, with McGrath also promoted ahead of David Kilcoyne.