Joe Schmidt defends use of Irish bench against South Africa 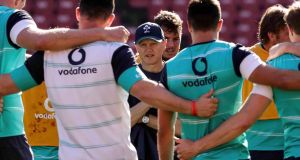 To stick or to twist? The impact of the Springboks bench helped to turn last Saturday’s second Test on its head.

On the other hand, several of Ireland’s replacements weren’t introduced until the game was effectively up. Yesterday Joe Schmidt explained the thinking behind his actions.

“It’s one of the difficulties with altitude,” he said. “You can’t really contribute as much until you get a second wind, and if you’re only going on with 10 minutes to go it takes about that long to get your second wind.

“Because of the nature of the game, it was so tight, as far as holding that margin was concerned we just felt that the players who were in the rhythm of the game were in the best situation to keep that going.

“It’s always difficult during the game, as opposed to hindsight. It’s one of those things now that we’ll hopefully have a few fresh bodies this week that will help boost the level of energy.”

Coming to the end of the most arduous international season Ireland has ever endured, this touring squad has suffered a relatively low casualty rate over the first two Tests, although Robbie Henshaw has returned home with a knee injury, the seriousness of which has still to be ascertained.

There is some scope to refresh the match-day squad for Saturday’s series decider in Nelson Mandela Bay Stadium in Port Elizabeth. This will most likely see the return of Mike Ross, Jordi Murphy, CJ Stander, Luke Marshall and Keith Earls, as well as Ultan Dillane to the match-day squad – all of whom were rested last weekend.

Eoin Reddan and Matt Healy are the two players yet to feature, while Kieran Marmion, Ian Madigan and Tiernan O’Halloran had no more than three minutes apiece off the bench on Saturday.

Speaking to Irish Rugby TV, Schmidt was asked if there was a tinge of regret that he didn’t make more use of the bench.

“It’s never as simple as just putting players on and saying ‘oh, he’ll freshen things up’. You’re always looking at the players who are on there, and the feedback we were getting was that ‘they’re okay and they can keep going’. Once we got messages that they were starting to fade we tried to work our way through the bench.

“But they earned the lead that we had, and so it’s hard to then take them away, and some of the players who did come off, when we’d earned a 16-point lead, they’ll look back now and they’ll have their own frustrations.”