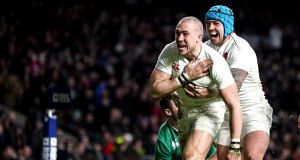 Irish rugby fans have been able to look past Mike Brown’s on-pitch antics in Twickenham last weekend - with over one in 10 of them admitting they would claim the all-action number 15 as one of their own.

And despite his infamous decision to drop Brian O’Driscoll for the Lions Tour in 2013 - Irish fans are again ready to forgive and forget with Warren Gatland their choice as the coach they would most like to step in if Joe Schmidt were no longer at the helm.

In fact the over 1000 fans who took part in a recent survey seem to fancy a dream back three of Brown, flanked by the little and large combo of Dublin’s Bernard Brogan and Hollywood star Dwayne ‘The Rock’ Johnson.

Brogan topped the Ulster Bank survey as the Irish sports man who fans would most like to see make the transition to the oval ball - tipping big Aidan O’Shea and UFC champion Conor McGregor to the honour.

Although if McGregor was to ever take up the sport 43 per cent of respondents feel he would make a great scrum-half - not something he’d like to hear no doubt as he aims to prove himself among the heavier weights in the UFC.

‘The Rock’ Johnson is certainly not lacking in size for any position - he was voted as the international celebrity who would make the best rugby player. English actor Jason Statham also made the list with a fifth of the votes. Asked if an Irish actor was to play Johnny Sexton’s life story, a quarter of respondents thought Cillian Murphy fitted the bill with Colin Farrell a close second.

England fullback Brown came in among the top votes for the international rugby player fans would most like to see play in the green of Ireland, behind the respective Welsh trio of Leigh Halfpenny, Alun Wyn Jones and George North.

The English full back avoided a citing in last Saturday’s defeat of Ireland after cameras caught him kick Conor Murray after repeatedly swinging his boot in an attempt to dislodge the ball from the hands of the Munster scrum-half. Murray would require stitches to his head following the incident.

Another surprising result then was that of Gatland as the Irish head coach we would choose to lead us out, if we had to. Eddie Jones came in as a close second, again despite his comments about Sexton ahead of last weekend’s encounter.

Also revealed in the survey, Scottish fans came out on top as the nation we interact best with - the Welsh coming in at second for that one as Irish fans picked the Millennium Stadium in Cardiff as their favourite away venue.

All in all though and despite the shock Brown and Gatland inclusions, the Irish fans showed their loyalty as 51 per cent say they ignore their phone and doorbell during Six Nations matches. While 22 per cent admitted to cancelling plans with their partners and avoiding family members.