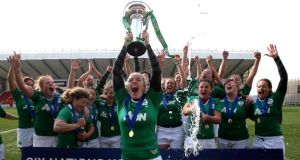 Nothing, seemingly, can stall their rise.

Hardly a competitive entity, but consider how far Ireland have journeyed to win a second Six Nations title in three seasons. With a World Cup semi-final in between, they are the most consistent Irish sporting team.

And to think, this was supposed to be a transitional season - major retirements, new coaches - yet a second ever Triple Crown has been claimed, made all the more remarkable considering the small window Tom Tierney had to prepare them before the opening fixture in Florence last month.

Niamh Briggs, as ever, delivered the crucial score that night. She got the first try here. The captain went one better than her male counterpart Paul O’Connell by adding the two points. And a penalty soon after.

Playing on this 3G surface, which invites fast rugby, Ireland brought instant composure and focus to attain the 27 point differential needed to haul in France, who beat England 21-15 at Twickenham on Saturday, before half-time.

“In fairness to the girls they have a huge work ethic on top of the quality that is already there,” said Tierney. “There was always going to be a few teething problems. We were fortunate that we got away with it in Italy and in the first half against France.

“But they are too good not to bounce back.”

The wonder is if Tierney, realistically, expected to win a Six Nations title at the first attempt.

“Honestly, why not? There were retirements after the World Cup but the core group of senior players were there and there are top class Sevens players coming through. Thankfully we got the right mix.”

Ali Miller is an example of both, senior core player and a Sevens flyer. The Laois lady’s second of three tries was a savvy, side-stepping, sprint finish. Briggs, the natural successor to Fiona Coghlan’s captaincy, planted the conversion to make it 37-3 at half-time.

They had previously lost Hannah Tyrrell to a dislocated shoulder but not before the former Dublin Gaelic footballer created Briggs’ early try.

Unlike the Triple Crown game in Scotland two years ago, they exuded an impressive calmness and ruthlessness throughout.

“Ah, two years ago we were in a position we had never been in before,”

explained Miller. “Today we were very composed. We knew the scores would come if we focused on our performance.”

Briggs was clearly playing through the pain barrier, as is her way, needing heavy strapping for her right knee. She kicked on.

The second half was a procession, with tries delivered by the driving maul, a key weapon under Declan O’Brien’s supervision.

But this team direct themselves. Sophie Spence, Ireland’s player of the campaign, was superb when carrying ball, especially running back restarts, of which there were plenty.

Claire Molly got through her usual load of unseen work while Ailis Egan, Paula Fitzpatrick and Heather O’Brien have consistently provided the power surge. Egan is fast becoming a national treasure.

“We were smart enough to know we weren’t in long enough to change much,” Tierney continued. “But we did force the girls to back themselves.”

It’s an impressive, straightforward approach with Jenny Murphy growing into her new outside centre role, vacated after a decade of service by Lynne Cantwell last year, and she was ably supported by Jackie Shiels.

“This is potentially only the start of it,” Tierney continued. “We got a World Cup in two years time and want to be competitive at that. So we must keep building, keep our senior players and unearth more talent.”

Shouldn’t be a problem.