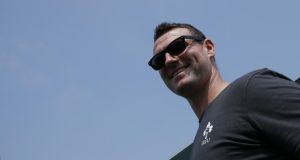 Scottish coach Seán Lineen believes their recent win over Ireland in the Six Nations will have little bearing today when the sides clash in the second round of games in the World Rugby Under-20 Championship.

Ireland, who have won all three games between them in the World Championships, fell to their third loss in eight Six Nations meetings when they went down 17-10 in Netherdale.

“It will have no relevance, we have to take every game as it comes,” said Lineen, the former Glasgow Warriors coach.

“It has been a long time since the Six Nations. The Irish will definitely be up for it on the back of that defeat there,” added Lineen, whose side were turned over 68-10 by his native New Zealand on Tuesday.

“It is the same in the last couple of World Cups, actually. We have always had a difficult first game and we have bounced back in typical Scottish fashion and that is just where we are.

“They are a good bunch of lads, they have taken the New Zealand result hard but they have a real lesson of modern rugby. If we take it on board, Ireland’s a massive challenge again and I am looking forward to getting it right,” said Lineen.

Ireland assistant coach Colin McEntee said they are still smarting from that loss in Netherdale and are fired up for this afternoon’s clash in Calvisano (3.30pm Irish) as they bid to back up their dramatic 18-16 win over Argentina.

“We are all a little bit hurting, players and management. We played them in Netherdale and to be fair they played really well that night,” said McEntee.

“We were probably a little bit disappointed that we conceded 10 points within three or four minutes, which really let them into the game. We tended to chase that game since that point.

“Our players have matured a fair bit and this will be the test but we prepared well in the limited time that we have had.

“The guys have done their work on the analysis. It’s such a short turnaround that a lot of it is just the mental and just getting that visual and confirming what we know about them and the opportunities that may present,” he said.

Head coach Nigel Carolan, whose side endured 30-degree heat during the captain’s run in north Brescia yesterday, has made four changes as he rotates his squad for the demanding five games in less than three weeks.

Three of the four changes for today’s game are up front. Andrew Porter, who replaced the injured Jeremy Loughman after just eight minutes against Argentina, starts with Sean McNulty taking over from Zack McCall at hooker. In the back row, Conor Oliver comes into the side for Rory Moloney.

The only change to the backline is on the right wing where Ciaran Gaffney, a late withdrawal before the Argentina game with an ankle injury, takes over from Jacob Stockdale.