Ireland to play All Blacks in Chicago next year 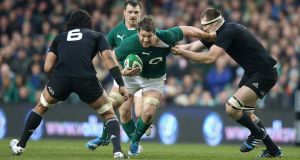 The Irish rugby team is to break new ground by playing New Zealand in Chicago next November, with a return fixture against the back-to-back World Cup champions to be held in the Aviva Stadium later in that same autumnal window.

The Irish Times has learned that Ireland will meet the All Blacks in Soldier Field, Chicago, on Saturday, November 5th, before hosting a Tier 2 country a week later at the Aviva Stadium. They will then play New Zealand again on November 19th as a prelude to rounding off a busy November window and year with a game against the World Cup finalists Australia on the 26th.

Soldier Field, which is home to the Chicago Bears American football teams, hosted its first international rugby union test match when the All Blacks beat the United States 74-6 in November 2014. The match was a 61,500 sell-out, and although only 23,112 attended Australia’s 47-10 win over the USA Eagles in a World Cup warm-up match last September, it will be a surprise if the combined popularity of both Ireland and the All Blacks did not ensure a sell-out for their meeting next November.

The World Cup highlighted the willingness of Irish supporters to travel long and far to support their country and the IRFU will thus be tapping into the Irish diaspora for a first ever meeting with the All Blacks in America.

These high profile tests are also in keeping with Joe Schmidt’s desire to face the world’s leading teams more regularly, and in addition to the Six Nations, adds to a three-test tour of South Africa next June in Cape Town, Johannesburg and Port Elizabeth. Six clashes with teams from the Rugby Championship in one calendar year is unprecedented and emulates the six games Argentina, Ireland’s World Cup quarter-final conquerors, will have against the same opponents in 2016.

Ireland have never beaten New Zealand in 28 attempts, dating back to 1905, and never came closer than in the countries’ most recent test at the Aviva Stadium in November 2013, when the All Blacks won 24-22 thanks to a try in over time by Ryan Crotty and a twice taken conversion by Aaron Cruden. They are now set to have two cracks off the World champions next year.