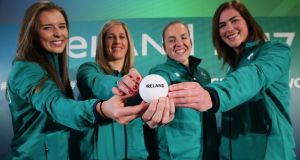 The Women’s Rugby World Cup delivered danger in Belfast. Ireland understand the dangers of pool rivals France as the teams meet every year in the Six Nations Championship. Other countries are largely watched from afar, but every four years they come into our orbit, and are almost always changed.

Australia is one. Judging by the last World Cup and Australia’s performances, no real panic should terrorise Ireland for that meeting in the pool phase of the tournament at UCD. But, as the global game hardens all round, Australia, who will share Ireland’s Pool C when the matches begin in August 2017, will be a challenge Ireland will decline to measure from past performances.

It is a tight fit in Pool C, with Ireland, Australia and France to be joined soon by another team from Fiji, Japan or Hong Kong. But Australia could be the team that have transformed themselves from a powerful sevens outfit into a viable threat to Ireland and France. And that could be due to some Irish influence.

“Australia is an interesting one,” says Donegal outhalf Nora Stapleton. “We know that they may not have done too well in the last World Cup, but then you look at what their sevens are doing and I know their whole 15s programme is kind of taking off again.

“They have employed a new development officer in there as well. She is actually from Ulster, Una McKay. They are putting a lot of emphasis on their 15s feeding into this World Cup, so they are going to be a completely different team.

“Scotland last year brought in a new development officer as well, and she completely transformed their team and the whole mentality, and I think they have improved. So have Wales, so it’s interesting to see what is happening close by.”

England, in Pool B, are probably on a different level in terms of support structures, and while they are not ranked best in the world in the current league table, they have grasped the medal-winning mentality more firmly than the other nations.

The Rugby Football Union has players on professional contracts, which governing bodies elsewhere are unable to do. It guarantees nothing, but it does impose a framework whereby England can go into the summer’s competition having left no holes in their preparation.

“There’s been a lot of talk about England over the last while and about the professional contracts they have given out to their players, which is great,” says Stapleton. “But it’s great they have done that, and other countries will be able to do that in the future.

“And then we don’t know who is going to come out of Oceania. So yeah, it’s going to be extremely tough. It’s going to be enjoyable. Very close, yeah. I got sent a message there by Claire Molloy saying its only 274 days away. It’s very near.”

The project will be helped by the first proper autumn series ever played by the Ireland women’s team. Last year, Ireland played England, but this year’s three Test matches in two weeks will have a more serious intensity and make more demands.

The tournament feel and attrition rate of three straight Tests will give Ireland coach Tom Tierney’s players valuable experience. The series will be an investment for the Six Nations Championship next year and it will put game time in legs that would not otherwise have ever known the demands of quick-turnover games.

“It’s absolutely critical,” says Tierney. “It started last year with the one international we had against England in the Stoop, so it just shows the women’s game is growing at a huge rate. To have three matches . . . Obviously England this Sunday will be very, very tough, and then you have teams that you would not ordinarily play, so it’s hugely beneficial. It’s great for the girls and great for our own planning.

“We are looking at it as a trial run for the World Cup in nine months’ time. It’s three tough games over the course of two weeks. It will be a high attrition rate, but it is something we need to get done because we get to know how these things work and to experience them before we have to do it.”

The real world of rugby. And pleased to be there.