Ireland need to have some Woshkabomy in their game 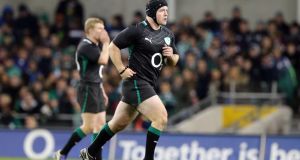 Sydney rugby legend Jeff Sayle, has a great word to describe a team playing with confidence and panache. “Woshkabomy.” It is pronounced wosh-ka-bom-e. Woshkabomy is not like “mojo” or “being in the zone”. Woshkabomy combines the confident attitude of wanting to run the ball with a larrikin, cheeky disposition of playing with fun and joy.

I first heard the term when I helped the Waratahs in the mid 1990s when Jeff was forwards coach. We toured South Africa in the then Super 10 competition and I was Jeff’s room-mate. Since those days he always referred to me as “Roomy”. As in, “Roomy go the bar and buy me a beer.” Jeff has a bad hip so it was also, “Roomy, would you carry my bags?”

Before a game Jeff would say ,”Today we need a bit of woshkabomy!” We would all smile. Jeff is a wonderful man from whom I learned a great deal. To carry his bag as a young coach was a small price to pay for the knowledge I gleaned from his experience.

Today I always try to spend some time coaching schoolboy teams. I do this because I believe it is incumbent on those of us who have been given great opportunity in rugby to put back into the game. I also enjoy the undiluted passion schoolboys bring to their performance.

The coaching challenge at schoolboy level is to remove the fear of failure from the young player’s mind. The players have to be encouraged to be brave and run the ball. Fear will stifle the joy of playing

I often tell schoolboys they need to play with a bit of woshkabomy. They always giggle when they hear the word. You can’t help but laugh at such a silly word. Jeff created woshkabomy to make players laugh and relax. Schoolboys should play with a smile on their face, passion in their heart and the running game in their hands and feet.

While schoolboy and international rugby are light years apart, there are some universal bonds. When you play for your nation there must be joy in your play, passion and confidence.

The confidence comes from understanding your own task, believing you can successfully deliver a quality performance and having belief your teammates and coach to do the same.

Currently, Irish rugby has the same amount of woshkabomy as an empty pint glass.The time is right to establish an independent review into the systems and processes in the elite player pathway and the Irish national team.

The pathways need to be reviewed, evaluated and a new direction mapped. This is not about sports science. This is about how we produce international rugby players and teams.

The issues are vast, political and emotionally charged so the review must be conducted by an external independent body and not the IRFU itself. New Zealand rugby set this precedent after the 2007 RWC. The recommendations of an independent report laid the foundation for the 2011 World Cup win. Interestingly the NZRFU report went against the media demands and did not call for a change of coach.

However issues such as the IRFU funding models, overseas player selection process, the role of Connacht, Ireland’s non-participation in the IRB Sevens, and the independence of the provincial teams’ style of play that is negatively impacting on the performance of the national team, have to be reviewed free from political influence.

The poor performance of the national team during the Six Nations is being dumped at the feet of Declan Kidney and his staff. That is a gross over simplification of the systemic problems in Irish rugby that have been masked by the talent of two generations of excellent players.

A new coach will inherit similar problems to Declan. One example is the problem of creating tighthead props for the national team. The current system recruited Michael Bent, who is not at international standard and sees Declan Fitzpatrick unable to get quality game time in his province.

While the IRFU are to be applauded for their excellent stewardship of rugby over the past decade and a half, there are major issues in the existing elite player system that require reform and renewal.

A top to bottom systemic review will identify the factors that will support the National team and empower the IRFU, the players and coaches to rediscover their "wooshkabomy."

Changing names on the door of the coaches’ office without systemic reform will not create the environment required to win on the international stage.