Ireland given reality check by Australia 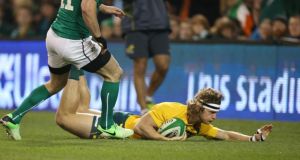 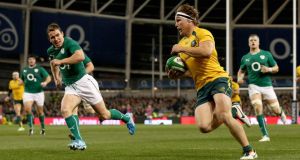 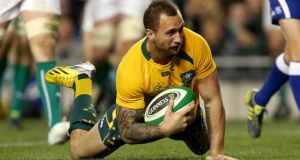 Now’s the time to try and make the marriage work.

But the worst possible news, with the All Blacks moving into Castleknock next week, was apparent for all to see on the stroke of half-time.

Jonathan Sexton knew instantly what had happened, pulling up with a hamstring injury, his premature departure overshadowing everything else.

The precise damage remains to be seen, but hands over his face as he departed. At least Ian Madigan looks a capable understudy in a fresh 10-12 combination alongside Luke Marshall.

It got worse as Rob Kearney was in serious discomfort when pulled off after a bang to the ribs six minutes from time. Schmidt was hopeful afterwards he would be fit to face the All Blacks.

Sexton had been impressively dictating the tempo as Ireland endeavoured to recover from the Wallabies two try head-start, landing four out of five penalties to make it 12-15 at the turn.

There was also a concern about Brian O’Driscoll, possibly a recurrence of his calf problem, as he was gone for seven minutes of the disappointing opening 40.

Ireland had plenty of opportunities to cross for tries, they just lacked the inventiveness to travel those last five or six metres. Instead, they sought to bulldoze over via Cian Healy or Peter O’Mahony.

Bigger Australian forwards repelled them time and again, with Sexton at least keeping it tight. Then he went off and Ireland’s challenge crumbled.

They had profited from the refereeing of Kiwi Chris Pollock, who sent the nuisance that is Michael Hooper to the sin bin on 32 minutes for one too many infringements.

The man of the match had earlier raced over for the second Wallaby try after a slick offload by Scott Fardy.

Their first touch down after 17 minutes was born out of clever lateral running by the excellent Quade Cooper, before he put Stephen Moore in space. The hooker beat Healy before Nick Cummins stepped the last two Irish defenders.

The anvil fell early in the second half when Australia spun an Irish scrum on their own five metre line before Will Genia zipped a pass to Cooper. The mercurial outhalf slid nonchalantly between Madigan and Luke Marshall to dot down beside the uprights.

Moments later he nailed a penalty that seemed out of his range, after Madigan was done for not releasing, to make it 25-12. Kearney was also at fault for an uncharacteristic fumble but his reaction thereafter was impressive.

Problem was, too few Irish men were in the inspirational mood. Even Paul O’Connell seemed off the boil, giving up one decent position with an unforced knock on.

Really the result was cooked way before the hour mark.

Surprisingly, the scrum was an area of weakness for Ireland.

“We had an agreement pre-game,” said Pollock to both hookers on the scrum malaise, “at the moment it is going all over the shop. If you want me to make decisions I will.”

It wasn’t Mike Ross’s greatest shift; Pollock pointing the finger at him for collapsing the scrum on two occasions. James Slipper has never been seen as a destructive loosehead.

Ross and Rory Best were replaced by Stephen Archer and Seán Cronin on 66 minutes.

Also, Eoin Reddan was put under plenty of pressure by Ben Mowen and other loose Australian forwards as they slowed up most of Ireland’s possession.

Hooper’s second try, off a lineout maul, on 68 minutes confirmed the tourist’s dominance. Cooper banged over the touchline conversation.

Then came an incident which rightly had O’Mahony in a rage before a red was shown to Tevita Kuridrani for spearing the Munster captain into the turf.

That sparked a belated Irish revival, Marshall making his third line break, but the scramble defence and a lack of ingenuity come second or third phase, ensured the attack died a slow, painful death.

All told, this was like what has gone before from Ireland in 2013. Another collectively poor showing. Some established players must now be under severe pressure to retain their place.