How the English press reacted to Six Nations climax

Reaction from inside Murrayfield as Ireland lift the Six Nations trophy. Ireland were made to wait through a nervy ending to the England v France game. 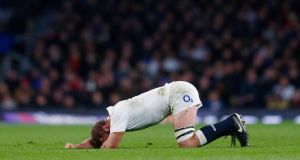 Before this year’s Six Nations championship there was a not so quiet confidence in England that this would be their year - the tournament where they channelled the spirit of 2003, sweeping away all before them and then proceeding to lift the World Cup on home soil.

Alas, the fairytale couldn’t become a reality, and while Ireland are celebrating consecutive titles the English media have been left to pick the bones out of a fourth fruitless campaign since their last win in 2011.

In The Daily Telegraph Brian Moore has reflected on what was a truly stunning final day of the tournament and he feels Ireland, more precise and disciplined than the rest, were the best team in the competition and ultimately deserved winners.

Moore feels England did a lot right in the tournament including scoring 18 tries, the highest out of anyone, and have a pack which is on par with the world’s rest. However he says their narrow loss was self-inflicted and they need to eradicate the critical errors which cost them if they want to lift the Webb Ellis Cup.

Instead of blaming profligacy in earlier fixtures Paul Hayward has pinned England’s defeat on the injustice of having staggered kick off times on the final day of the championship.

He writes: “Proponents of staggered kick-off times (and there are probably many more now) ignore not only the potential for manipulation but the reality that Italy and Scotland, who had nothing to gain beyond scraps of pride, shaped the last round of games by capitulating to Wales and Ireland respectively.

“Scotland’s implosion at Murrayfield was particularly lamentable. England’s win-target rose from 16 points to 26 on a day of immense fun but built-in unfairness.”

In The Guardian though Paul Rees praises the staggered kick off times and says the tension and drama of the closing act wouldn’t have been as high if the three championship contenders were made to play at the same time.

Writing for the BBC Jeremy Guscott believes Ireland are all set to go deep at the World Cup and should have a fairly straightforward passage into the semi finals.

He also feels England will join them and believes their impressive record at Twickenham - South Africa are the only side they haven’t beaten at home under Stuart Lancaster - will mean they are confident and capable of beating anybody later this year.