Greg Feek: Ireland U-20s an inspiration for senior side 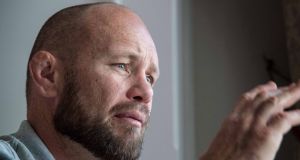 Ireland scrum coach Greg Feek has been pleased with how his pack have matched their South African counterparts. Photograph: Inpho

The season that hit a mid-campaign hump in the form of a post-World Cup hangover, has provided an unexpected and unprecedented finale. After Connacht’s memorable Guinness Pro12 exploits, Saturday offers the possibility of a historic series win in South Africa swiftly followed by the Irish Under-20s final against England.

The favourable timing and wall-to-wall tv coverage in South Africa has enabled the Irish squad to watch their Under-20 counterparts, and Irish scrum coach Greg Feek admits the youngsters’ exploits have been providing inspiration for their elders.

“Yeah, we’ve been keeping an eye on them and we’re pretty proud of how they’re getting on and we’re even inspired by some of their performances and what they’re doing. We’re certainly wishing them all the best in their upcoming final against England.”

Of particular interest to the former All Blacks’ prop is that the stock of loose-head props looks set to be expanded given the form of Andrew Porter, whose deeds in the gym room are already a source of wonder to some of the seniors in the Leinster ranks.

“He’s a strong man and he’s really starting to grow into himself,” said Feek. “I think he’s really grown over the last six months. He’s grown into his core roles, particularly. He’s always been pretty strong and that’s starting to transfer now. It’s great to see for him.”

Ireland’s stock of young props is growing on both flanks mind, given the hugely encouraging first test start for Tadhg Furlong in last week’s second test.

“There were a lot of nerves coming over here particularly with the reputation and the size of the South African pack,” admits Feek. “Both teams won their ball, 100 per cent so it wasn’t too one-sided from our point of view, the boys were pretty sore and battered. So, hopefully we can at least match them again this week. We’ve grown from this experience because all their forwards there, we learned something from and I suppose our goal, as a pack, is to improve each week from the week before and to learn and gain experience from that. It’s been massive in terms of that, for us.”

Noting Quinn Roux’s debut, Feek added: “We were pretty pleased with how he went. He hasn’t played for quite a long time so he did really well. Obviously Tadhg, he’s been on our radar for a while and I think he did very well from where we were sitting.”

Furlong has spoken of how Mike Ross has been a guiding influence and Feek said: “They spend a lot of time together in the club and I think it’s important for a young player to have a mentor that’s been there and done that, they’re great support for each other, I think.”

All three players have left the Springbok camp, and speaking of Vermeulen, Feek said: “He’s one of the most powerful loose forwards in world rugby and sometimes you spend an extra bit of time working out how to stop someone like that, whether it’s ball carry, tackle and particularly when he’s on the ball, he’s hugely strong and I think the players around him would get boosted by having him there.”

“I tell you what, they’ve got some depth at loose forward with Whiteley and those sort of guys, there’s so many good players over here and we’re certainly in awe of some of the talent that is available. From a South Africa point of view, it’s a big loss but I suppose if you look at it positively, you’re going to introduce guys who are just as good.”

As for Saturday’s 43,000 sell out at Nelson Mandela Bay Stadium, Feek maintained their own shot at history would not be a distraction. “We’re always very task focused so we try to make sure our trainings match how we’re trying to play one week at a time and that’s no different this week. Obviously, we’re a little bit disappointed from the weekend but we also know it’s a tough ask to come over here and win one Test match, so it’s certainly our focus for this week.”

Reflecting on last week’s second test, when Ireland led 26-10 entering the last quarter and were in sight of that series win, the Irish scrum coach said: “South Africa played really well. They showed how dangerous they are as a team. We know we have to be better than that in that last quarter so they’re a world class side, so there’s a number of little things that we need to get right and I suppose looking after the ball is one thing and obviously there’s a few other errors that were made. Some of the guys who came in were probably trying a bit too hard at times maybe so I suppose that’s the mental part of Test matches.”

After what was probably a relatively light enough run-out this morning, Devin Toner answered whether Ireland are over the the game in Johannesburg.

He said: “I wouldn’t say we’re over it. We’re still going through the footage, we’re still looking at the video, we’re still kind of hurting over it but I think training went alright today. I think we’re very much still in recovery mode, I think there’s still a lot of sore bodies out there so I think we’re going to try and build our way into the week and try and get back into for Thursday and Friday and try and peak for Saturday because we know that we should have won that. We were pretty much ahead and it was just the last 15/20 minutes that we let it slip so we’re not over it to be honest, no.”