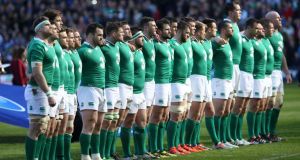 Ireland players line up for the anthems ahead of the Six Nations international rugby union match between Scotland and Ireland - Six have been selected for our Six Nations team of the tournament. Photograph: Ian MacNicol/Getty Images

Leigh Halfpenny’s goal-kicking could give him the nod again. Stuart Hogg was electric and carried for 100 more metres. But Kearney was the best all-round fullback, sweeping brilliantly, and is the only Irish player to start every game of the 2009 Slam and last two titles (in which he has played 80 minutes every time).

14 Yoann Huget (France): One of the few consistent and redeeming features of Les Bleus in recent seasons, and remains a potent threat off limited opportunities if still questionable defensively. Tommy Bowe grew into the tournament and, pound for pound, still looked the best right winger around, and George North did score Saturday’s hat-trick off a more unfamiliar right wing.

13 Jonathan Joseph (England): Some players arrive on the Test scene without fear and light up their sides, and Joseph’s dancing footwork and pace transformed the threat of a previously one-dimensional midfield and he also finished as the tournament’s leading try scorer. Given Joseph’s understanding with George Ford and Anthony Watson, does Stuart Lancaster restore Manu Tuilagi now?

12 Robbie Henshaw (Ireland): Made more than his fair share of tackles (okay, missed a few too) in a position where he has only played about seven games in his life. Carried superbly into traffic at start, revelled in the physicality of it all, conjured wonderful match-winning try against England and showed his free-running class in more space last Saturday.

11 Jack Nowell (England): Called in to counter Ireland’s aerial game in the third round, Nowell’s pace and footwork and running threat also sharpened England’s cutting edge. Credited with the tournament’s highest number of clean breaks. He also scored three tries in three games, though thankfully a fourth against Ireland in almost the last play was disallowed for a forward pass by Billy Twelvetrees. Turned out to be kind of important.

10 Johnny Sexton (Ireland): Considering his pre-tournament base of 12 weeks without a game, returning for the second outing at home to France, Sexton was remarkable. Richest array of kicks (Ronan O’Gara must have something to do with that spiral) were central to Ireland’s aerial and territorial supremacy, consistent almost flawless off tee until late aberrations against Scots and defensively magnificent. Simply the best.

9 Conor Murray (Ireland): Ben Youngs, Rhys Webb et al made this one of the tournament’s strongest positions. Murray brought huge work-rate, defensively superb with his sweeping behind the line, and the other half of Ireland’s game-controlling half-backs, he made around 100 passes more than any other player in the tournament. Could have run a little more.

1 Joe Marler (England): England are handsomely well served across the frontrow, but particularly at loosehead, where Marler is backed up by two Lions in Mako Vunipola and Alex Corbisiero. Strong scrimmaging, big-carrying, mobile loosehead. Eddy Ben Arous made a sizeable impression, in every sense, in his rookie debut campaign.

2 Guilhem Guirado (France): Another strong showing across the board, when one also thinks of Leonardo Ghiraldini and Rory Best, but the Catalan hooker was one of the few reliable cornerstones of the French team and aside from being a serious operator in the tight, his try-scoring assists against England, including that offload out the back to Maxime Mermoz, set him apart.

3 Dan Cole (England): Arguably England’s best player against Ireland and perhaps their most consistent player of the tournament. Aside from his strong scrummaging, Cole was typically mobile, defensively strong and as ever was adept at the breakdown and difficult to shift, winning six turnovers.

5 Paul O’Connell (Ireland): Ireland’s spiritual leader and talisman, he clearly works in total harmony with the coach. The 35-year-old played all 400 minutes. Ireland’s best player on his 100th cap against Wales, he picked them up by the scruff of the neck and led the try-scoring charge against the Scots to the title. Some operator. Some way to bow out, if this was to be his last campaign.

6 Peter O’Mahony (Ireland): Perhaps the epitome of a Munster blindside flanker. Unrelenting, unstinting physical commitment and bravery, as well as fine lineout operator, O’Mahony carried and tackled ceaselessly, playing all bar the final 14 minutes in Rome, and finishing it off with a barnstorming final 40 in Edinburgh.

7 Sam Warburton (Wales): Doesn’t feature in any of the leading stats charts, but so what? Left an indelible imprint on all five games, particularly so in his 70 minutes on the pitch against Ireland when, as captain, he epitomised Wales’s iron will. A brick wall in defence and immovable over the ball at the breakdown.

8 Billy Vunipola (England): Toby Faletau (is he really the same player who plays for the Dragons?) left his mark as ever, but if Cole wasn’t England’s best player against Ireland, then Vunipola was. Credited with more carries than anyone else in the tournament, he was simply a go-forward reference point for England’s attack and a human wall in defence.

1 Ireland backrow of O’Mahony, Van der Flier and Stander to be retained against England
2 Triple bogey costs Rory McIlroy as Adam Scott prevails at Riviera
3 Newcastle feel the heat as Arsenal get some of their old mojo back
4 Gambling advertising in sport: How much is too much?
5 On healing and wild hurling: The re-education of Diarmuid Lyng
Real news has value SUBSCRIBE